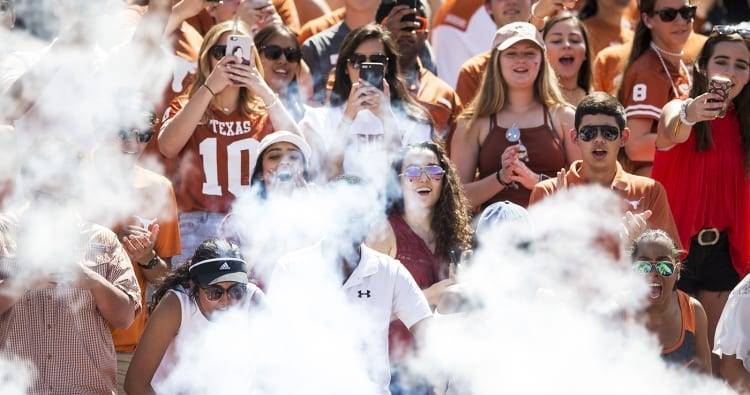 Texas and USC meet for the first time since the classic 2006 Rose Bowl national championship on Saturday, September 16. Find game time, TV channel and information about how to watch online below.

Nostalgia will fill the air as the Longhorns and Trojans take the field for the first time since Vince Young’s magical fourth-down run, and much of the buildup has focused on “the rematch.” But in 2017, these teams are on far different paths.

Texas enters at 1-1 after following a season-opening loss to Maryland with a 56-0 blowout of San Jose State. Meanwhile, USC looked every bit deserving of its No. 4 ranking in a 42-24 dismantling of Stanford last week.

Here’s everything you need to know to catch the game.

Weather: The forecast calls for 70 degrees and mostly clear skies, with light winds, at kickoff time.

The line: USC is a 17-point favorite to beat Texas.

Which TV channel is Texas-USC on?

The Texas-USC game in Week 3 is on FOX.

How can I watch Texas-USC online?

The game between Texas and USC can be viewed online via FOXSportsGO.com and the FOXSportsGO app. Gus Johnson (play-by-play), Joel Klatt (color analyst) and Jenny Taft (sideline reporter) will be the TV announcers calling the game.

How can I listen to the Texas-USC game on the radio?

The Texas-USC game in Week 3 will air live on the Longhorn IMG Radio Network. In Austin, the local radio affiliate is 104.9 The Horn. A full list of Longhorns radio affiliates can be found here, or you can click the play button below to listen online.

Texas-USC preview, keys to the game

Texas is 2-8 in its past 10 road games, and this may be the most difficult environment they play in all season. USC has already announced its first home sellout in four years at the 92,348-seat Coliseum.

The Longhorns will have a strong contingent, having sold out their allotment of 5,700 tickets, but most of the crowd will be behind the Trojans. Texas won’t have Bevo there, either. Tom Herman has said the goal is to keep players’ routines as normal as possible, and this will be the first test of whether his team travels better than Charlie Strong’s did.

One of the biggest questions circling the 40 Acres has been which quarterback will start for the Longhorns in Week 3. Shane Buechele threw for 375 yards against Maryland, but an injured throwing shoulder forced him to sit out last week.

Freshman Sam Ehlinger threw for 222 yards against San Jose State in his debut, and junior Jerrod Heard also ran for 39 yards out of a wildcat package. Buechele practiced for the first time Tuesday, and Herman has said if he is healthy he will play. Whichever quarterback sees the field, the Longhorns will need him to play well to have a chance.

Sam Darnold is the Trojans’ star. The sophomore quarterback has thrown for 605 yards and completed nearly 75 percent of his passes through two games. However, he has thrown as many interceptions (four) as he has touchdowns.

We broke down those four picks in an attempt to figure out if this is a weakness the Longhorns can exploit. The verdict? Darnold’s interceptions are a by-product of his confidence, which is also one of his greatest strengths. Picking him off is certainly possible, but it’s going to take a level of mental toughness that Texas has yet to show. It’s definitely something to watch.