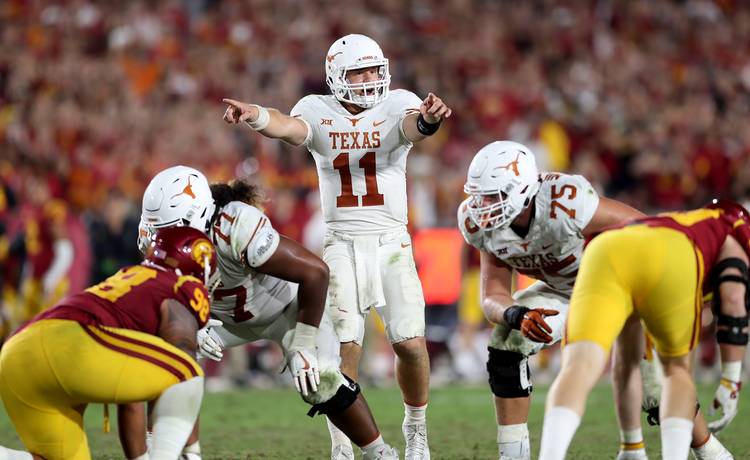 Texas quarterback Sam Ehlinger (11) calls out to his teammates in the second half of the NCAA college football game against USC held at Los Angeles Memorial Coliseum on Saturday, September 16, 2017 in Los Angeles. RICARDO B. BRAZZIELL / AMERICAN-STATESMAN

LOS ANGELES — His team lost, he threw two interceptions and had the ball stripped away for a costly turnover in double overtime. But Texas quarterback Sam Ehlinger was smiling ear to ear on Saturday night.

In his mind, the 1-2 Longhorns are on their way. USC fans seemed to think so, too. Why else would the Trojan faithful give the visitors a standing ovation after a thrilling 27-24 double-overtime barnburner?

“We’re so excited,” he said, almost giddy. “All the things in this game that we messed up are fixable.”

Every Longhorn who emerged in the tunnel after a stunning night in the Coliseum was brimming with confidence. Only the ultimate diehards would’ve picked UT, a two-touchdown underdog, to beat fourth-ranked USC. The Longhorns almost knocked them out on their own turf.

The school announced Sunday afternoon that Williams suffered two sprained ligaments and a torn meniscus. He’s scheduled to undergo surgery in the next 7-10 days, and there is no timetable for his return.

It’s a huge blow to the offensive line and robs the Longhorns of their only offensive team captain.

Injury news aside, when you look at the USC game from a forensic standpoint, there were mistakes galore. Like two bad snaps, dumb penalties like Devin Duvernay’s personal foul 50 yards downfield and Reggie Hemphill-Mapps’ decision to field two punts practically from the 1-inch line.

About the mistakes, UT coach Tom Herman said, “We made our fair share of them.”

But you cannot deny this team left the historic building feeling good about itself. The looks on the players’ faces and the tone of their voices was undeniable. Sure, these Longhorns have flaws, but they also have confidence. Ask anyone who’s played college football before, and they’ll tell you that goes a long way.

Herman said the season-opening loss to Maryland wasn’t a true reflection of how Texas prepared during the offseason. Now, it’s looking like he was right.

“We’ve got a good team that you can count on,” defensive tackle Chris Nelson said. “You can look at your teammate and tell he’s ready to go.”

Said Safety DeShon Elliott, “The reason we have this confidence is because of the work we put in during the offseason. The way we work, you’ve got to be confident.”

Elliott then rattled off a laundry list of reasons why the Horns bottled up Ronald Jones II and USC’s running game. “Can’t win no games without our D-line and our linebackers,” he said. “Malik, Wheeler, Gary, Poona, Chris Nelson, Charles… they were out there ballin’, getting that push that we needed.”

Texas now enters the off week with a shot of adrenaline, although Herman knows he’s still got a quarterback decision to make.

When asked about the quarterback situation, Herman said, “Moving forward, I don’t know.

“Monday we’ll see how Shane feels,” he said. “If he feels great, if he’s 100 percent, he’ll probably get the bulk of the first-team reps just off the top of my head. He hasn’t done much, if anything, to merit a change.

“But we know there’s a guy that had some freshman issues tonight,” Herman continued. “But he’s a guy that was a warrior there down the stretch on the road against a top-five team. We’ll see where that takes us. But I would imagine if Shane was 100 percent on Monday, he’ll take the bulk of them and we’ll still continue to give Sam some, too.”

It’s also worth watching to see if Texas keeps rotating quarterbacks with Jerrod Heard. The third-stringer is meant to be a change-of-pace threat. But the Trojans weren’t fooled, and Heard would come in seemingly after Ehlinger would make a big play, thus thwarting momentum.

Still, the overriding takeaway for this team is that Herman’s methods just might work. If any Longhorn is still “compliant but not convicted,” as Herman likes to say,” what’s stopping them from getting on board now?

“A loss is a loss. There’s no moral victories,” receiver Collin Johnson said, echoing his head coach. “But the thing is, I just love the way our guys fought. They just gave it all they got. I just gave it al I had. We just gotta keep building every game, keep building on the positives.”

The post Lost in L.A.?: Longhorns emerge from double OT thriller confident about the future appeared first on Hook ‘Em.