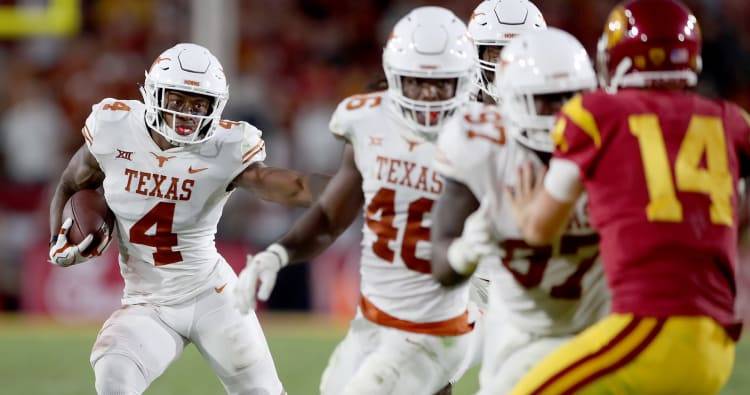 There were 163 snaps taken in Texas’ 27-24 double-overtime loss to No. 4 USC on Saturday. Here are five that ended up making a big difference:

Texas and USC tallied 188 points over the first two weeks of their seasons, but neither team found the scoreboard in Saturday’s opening quarter. UT’s offense then was dealt a significant blow on its first snap of the second session. Wildcat quarterback Jerrod Heard was stopped for a short gain, but he was tackled into left tackle Connor Williams on the play. Williams, a 315-pound All-American, left the game and was quickly ruled out with a knee injury. USC recorded all five of its five sacks after Williams’ injury, and UT managed a measly 60 rushing yards on 28 carries.

2. Finding some offense on defense

USC entered halftime leading 14-7, and all the first half’s points were scored in the final 2:40. Texas got its points with 19 seconds remaining when junior safety DeShon Elliott plucked up a deflected pass just before it hit the ground. Elliott then returned the football 38 yards for UT’s third defensive touchdown of the season. (At that point, it was also Texas’ third interception of year). In the first half, Elliott’s defense also forced a missed field goal and stopped fourth-down attempts at the Texas 1 and 37. Elliott later intercepted another pass in the fourth quarter.

Texas struggled offensively on Saturday and had not a 14-yard run been wiped out by a penalty, punter Michael Dickson would have exited the third quarter as the team’s leading rusher. UT, though, only trailed 14-10 when freshman quarterback Sam Ehlinger was chased to his right on a second down from the USC 17 with 45 seconds remaining. Ehlinger found Armanti Foreman, who beat USC CB Jack Jones to the football and got both of his feet down before tumbling out of bounds. Foreman, who scored for a third straight game, capped a 91-yard possession, but USC quickly forced overtime with its own scoring drive.

Texas and USC exchanged touchdowns in the first overtime as Sam Darnold threw a 25-yard pass to Deontay Burnett and Ehlinger collaborated with fellow freshman Cade Brewer on a three-yard score. After UT declined to go for a game-deciding two-point conversion, the Longhorns were given the football in the second overtime. Ehlinger drove the Longhorns from the USC 25 to the Trojan 3 in four plays, but he was then stripped while trying to plow his way into the end zone. The turnover was the fourth of the game for Ehlinger, who threw for 298 yards and two touchdowns.

Ehlinger’s fumble — which defensive lineman Christian Rector forced — gave USC a clear-cut path to victory. The Trojans, though, were then denied on a first-down run before Darnold threw two incomplete passes. That put the game on the foot of freshman kicker Chase McGrath. After Texas attempted to ice McGrath with a timeout, he nailed a 43-yard attempt for the win. McGrath, who walked onto USC’s roster, had missed from 46 yards earlier in the game. He, however, rebounded to hit a game-tying 31-yard kick at the end of regulation. That was the first successful field goal of McGrath’s collegiate career.

Freshman walk-on with the walk-off for USC pic.twitter.com/sq3jxc8Nio