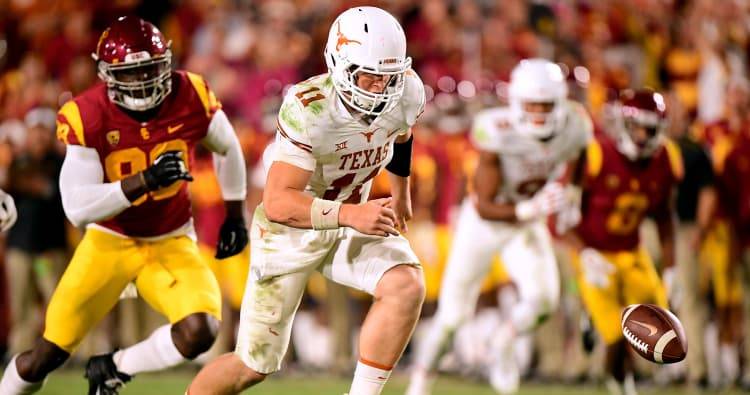 Texas had its chances Saturday night before dropping a tough 27-24 double-overtime loss at USC.

But the Longhorns were done in by their own mistakes. A fumble by freshman quarterback Sam Ehlinger set up the game-winning 43-yard field goal by freshman walk-on kicker Chase McGrath.

The loss prompted a variety of emotions among Longhorn fans.

Here’s a sampling of what they had to say, with their comments edited for style and clarity.

Joey Medina: “Not mad at all. On the road, a 17-point underdog against the #4 ranked team and they nearly pulled it off.  If you’re upset at the Horns tonight go find another team.”

Morgan Johnson: “Bottom line. Texas has so much to build on. This team is coming around.”

Eric Gervasio: “That TD USC scored with 5 seconds left in the first half should have never happened!!!”

John Zins: “Hell of a game played by Texas, no shame in this loss. For the past week I’ve been hearing crap about how Texas doesn’t have a chance, how USC is gonna destroy them and I called bull crap and said Texas is gonna come out strong and they did. There were mistakes especially on offense but nothing that Texas can’t fix. Texas has a bright future and if we see them continue to improve each game for the rest of the season Texas will be coming out of the Big 12 strong this year. Hook’em Horns!!!!

Stephen Kercho: “Keep your heads up Longhorns! It was a disappointing loss, but great effort….the type of effort we have been missing for years.”

Clayton Buck: “Hey, they showed something tonight. That actually looked like a Texas team for most of the game. Take away that amazingly bad “prevent” defense with 45 seconds to go in the first half that let USC hit the long TD play, and they played relatively good, aggressive football. Ehlinger showed a lot, for a true freshmen making his 1st away game start. Maybe bowl bound!”