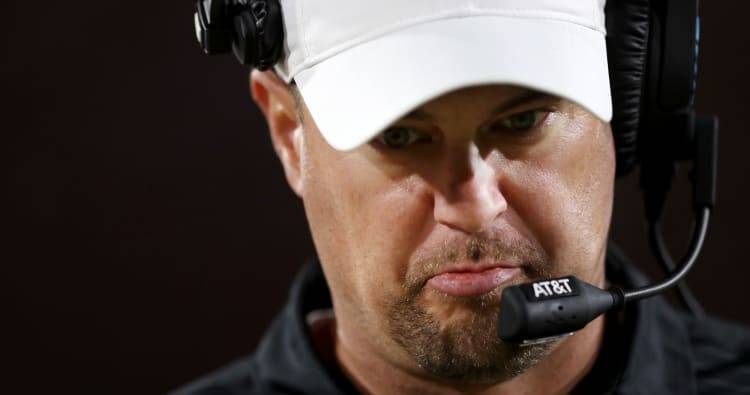 Texas let an upset over a fourth-ranked USC escape from its clutches Saturday in Los Angeles, as the Longhorns fell 27-24 in double overtime at the Los Angeles Memorial Coliseum.

RELATED: Heartbreak in LA: No. 4 USC escapes Texas with a 27-24 overtime thriller

Afterward, a proud but dejected Tom Herman faced the media. Here’s some of what he had to say.

“The power of playing hard”

From the opening kickoff, Texas looked like a different team than the one that lost 51-41 to Maryland in Week 1. In particular, the defense pieced a stellar performance against a high-powered Trojans offense led by Heisman Trophy candidate Sam Darnold.

“We still made our fair share of mistakes, but it’s amazing the power of playing hard, never giving up and playing with resiliency,” Herman said.

Texas held USC to 17 points in regulation and only 71 rushing yards. Defensive back DeShon Elliott intercepted Darnold twice, returning one of those for a touchdown in the second quarter.

“After we lick our wounds and realize how close we came, I think we’re going to be able to build on this immensely,” Herman said.

Tom Herman: “After we lick our wounds and realize how close we came, I think we’re going to be able to build upon this immensely.”

Fans on Twitter seemed miffed that running back Chris Warren III only received four carries, which went for a total of 15 yards. As a team, the Longhorns ran 35 times for 68 yards.

Herman was asked whether the exit of left tackle Connor Williams affected the flow of the running game, and mostly deflected the question.

“Whether it was the running back, the offensive line or the play-calls, I won’t know until I watch the film,” he said.

As for Warren, he acknowledged that he’d like for the running back to get the ball more but pointed out that the holes were not there — the Longhorns’ longest rush by a running back went for five yards.

“We’ve got to figure out ways to get (Warren) the ball on plays that he’s good at and that we’re good at up front,” Herman said.

He also said Warren was being treated for an “eye laceration” sustained at some point during the game.

Freshman quarterback Sam Ehlinger had ups and downs in his second start. He threw two interceptions, but led a 91-yard drive that he capped with a 17-yard touchdown pass to Armanti Foreman that put the Longhorns up 17-14 with 45 seconds left.

Herman said he knew Thursday that Ehlinger would start instead of injured starter Shane Buechele (shoulder). He said Buechele would still take reps with the starting unit if he’s back to full health on Monday.

“(Buechele) hasn’t done much if anything to warrant a change. We know there’s a guy (Ehlinger) who had some freshman issues tonight but was a warrior down the stretch on the road against a top-five team.”

Herman says if Buechele is 100 percent on Monday, he’ll likely get the bulk of the reps with the first team.

The post What Tom Herman said after Texas lost 27-24 to USC in double overtime appeared first on Hook ‘Em.

Texas fans sound off on excruciating overtime loss at USC