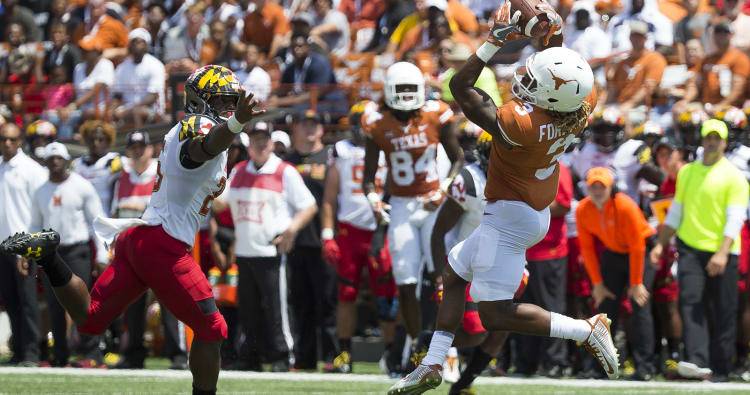 A wrist injury will slow — but not sideline — Texas receiver Armanti Foreman.

Texas announced on Monday night that a sprained wrist will limit Foreman this week. Foreman, who was injured late in UT’s 27-24 double-overtime loss to USC on Saturday, is expected back at practice next week. The Longhorns have a bye this week. UT next plays at Iowa State on Sept. 28.

Foreman’s 15 catches rank second among the Longhorns. The senior is averaging 9.7 yards per catch, and he has scored in each of UT’s three games. A 17-yard reception gave Texas a 17-14 lead with 45 seconds left in the USC game.

Foreman led Texas in receptions and receiving yards last year. He, however, was buried on Texas’ depth chart at the beginning of this season. On Monday, Texas coach Tom Herman was asked about Foreman’s progress at his weekly press conference:

He’s practicing better. I don’t have any other way to say it. He was third on our depth chart because he was a really bad practice player, and I’m not telling you anything I haven’t told him. And he’s bought in to the necessity of great practices and has had them these last few weeks. The football Gods usually reward people that practice really well. Obviously I say that sarcastically because there are no football Gods. He’s rewarded on Saturdays because of how hard he has practiced and how well he’s practiced. So really excited for him to embrace that role and hopefully he’ll continue to do that.

Where was Texas RB Chris Warren III against USC?