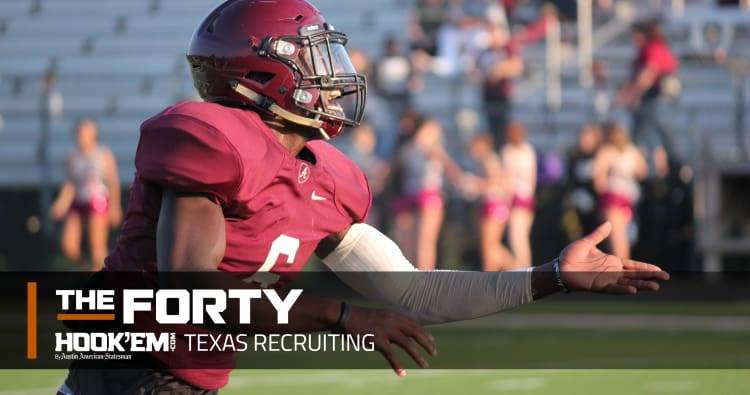 The best running back in Texas

It’s hard to find a consensus in recruiting circles. Rarely do national and regional scouts agree on the top player in a state, much less at a position. A quick search around recruiting sites reveals differing opinions on Texas’ top players in the 2018 class at positions like quarterback, wide receiver, linebacker and in the secondary.

But not at running back.

Texas commit Keaontay Ingram is clearly the best 2018 running back in Texas and he put on a show in Carthage’s 42-20 victory at Whitehouse on Friday night.

He scored his team’s first and last touchdown, finishing with 179 yards on 19 carries. The 4-star added 4 catches for 38 yards.

“I don’t worry about the expectations or who is the best,” Ingram said. “I’m out here helping my team win and I can’t do anything without my 10 teammates on the field with me. We’re heading in the right direction as a team.”

Carthage is normally headed in the right direction. It’s one of the top programs in the state is and the defending Class 4A Division I champion. Ingram was one of the main reasons for that title. His recruiting stock grew and he eventually chose Texas on May 30 over 27 other offers.

“It felt like home,” Ingram said. “I’m still receiving recruiting attention and coaches contact me. I’m respectful and listen to what they have to say because the scholarship offers are the reason my mother doesn’t have to pay for college.”

Ingram is the No. 19-ranked player on the Fabulous 55.

DeMarvion Overshown: The definition of versatile

Not every player has a defined position in high school. Arp’s DeMarvion Overshown is the perfect example. The 6-4, 200-pound defender plays nearly everywhere for Arp. He starts at safety and wing back, and he’s already scored a touchdown in four different ways through three games.

In Week 2 he scored as a rusher, a receiver and a defender, returning a fumble for a touchdown in a 1-point loss to Hughes Springs. And Overshown made his mark again in Week 3, scoring a first-half touchdown as a punt returner and adding the game-winning touchdown over Alto on the ground.

Overshown played all but four snaps in the first half.

Overshown is ranked as a safety prospect. There isn’t a guarantee the 4-star recruit remains at safety once he’s at Texas, though. He’ll play defense but could easily grow into a linebacker because of his frame.

“It doesn’t matter to me where I play,” he said. “I just want to go make plays somewhere on the field.”

Arlington Lamar picked up its first win of the season last Thursday in a defensive struggle over Keller Central. Texas target and 4-star defensive tackle prospect Bobby Brown helped anchor the Lamar defense. Brown, who spent Saturday on a visit to Oklahoma, holds a Texas offer and is a priority for the Longhorns in 2018.

“Texas talks to me a lot,” Brown said after the game Thursday. “Coach (Oscar) Giles talked to me on Wednesday. They tell me how much I could be used and that I could play defensive end or defensive tackle, though I’d prefer to play on the edge.”

Spring Westfield 4-star defensive tackle Keondre Coburn is Texas’ lone defensive line commitment for 2018. The Longhorns are in pursuit of several ends, but Brown is clearly the top target left on the board at defensive tackle. Texas faces stiff competition from Oklahoma, Alabama and others.

“Texas will be one of my official visits,” he said. “I like what Texas is building.”

The post Texas is finding recruiting gold in East Texas, too appeared first on Hook ‘Em.

What is the confidence level of the Longhorns heading into the bye week?