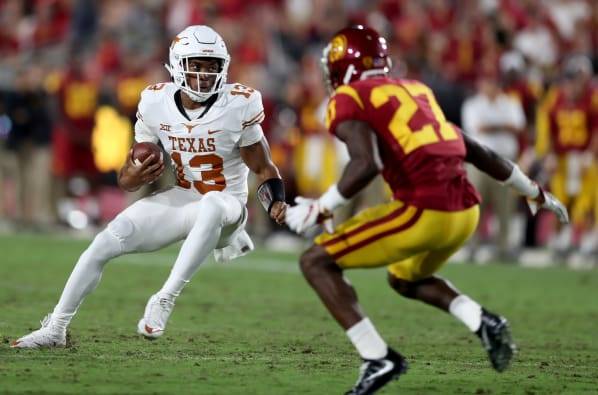 When Texas comes off its bye week, where will junior Jerrod Heard appear on the depth chart?

At his Monday news conference, Tom Herman didn’t have an answer.

Heard has spent the past two weeks serving as a backup to freshman quarterback Sam Ehlinger, and Heard has carried the ball in a situational role. Heard opened the 2017 season as a receiver coming off a 24-catch season a year ago. He also was a candidate to return punts.

With Shane Buechele nearing a return after recovering from a shoulder injury, where does Heard fit into the offensive game plan? As UT’s wildcat quarterback, Heard ran 12 times for 50 yards and two touchdowns over the past two weeks. During that span, he had to focus on absorbing the entire playbook since he was Ehlinger’s backup.

Herman was non-committal about whether Heard would practice with the quarterbacks or receivers. He will, though, appear less in the future plans for the Longhorns QBs.

“I think his package will decrease in terms of volume, number of plays, because you’re not going to need him to get you out of a game, too,” Herman said. “I think, one, it will shrink for good reason, but who he practices with, we haven’t really talked about it yet.”

Questionable returns: Redshirt freshman Reggie Hemphill-Mapps has seen some highs and lows over his short stint as a punt returner. Against Maryland, he recorded a 91-yard return that is the third-longest in school history. On Saturday, though, Hemphill-Mapps grabbed punts at UT’s 1-yard line and at the goal line, and he was stopped at the Texas 2 on the latter return.

On Monday, Herman said he didn’t have a problem with a back-tracking Hemphill-Mapps fielding the first punt. The second return was “not what we coach,” Herman added, although he appeared to place more blame on the coaching staff than Hemphill-Mapps.

“Again, everything goes back to coaching,” Herman said. “As much as we rep fielding punts inside the 10-yard line or inside the 15-yard line, which obviously it’s not habit yet enough. We believe in the way that we coach, we’ve just got to coach it more, obviously, until it becomes habit.”

Chew on that: Texas fans who tuned into Saturday’s game may have seen video of Herman chewing gum and popping bubbles on the sidelines. Herman was asked about his gum-chewing habits on Monday.

Our Monday gift to you is this GIF of @CoachTomHerman blowing a bubble. You’re welcome: https://t.co/XfEhngSLg5 pic.twitter.com/Z8vlkFPuPE

Herman told reporters he is a Dubble Bubble guy, and he opts for the sugar-free bubblegum. He also divulged he places seven pieces of gum in his pocket ahead of each half.

Said Herman: “Yeah, I think it’s just kind of a — I don’t want to say nervous habit, but obviously there is something to that. Just the intensity level during the game is pretty high, and that’s something that at least I can kind of unwind a little bit by chewing some gum.”

Boyd suspended: A Texas spokesperson said Monday that junior cornerback Kris Boyd was suspended for the first quarter of the USC game. Boyd was sidelined for an undisclosed violation of team rules. Boyd, whom UT coaches expected to be a leader among the cornerbacks, finished the game with two pass break-ups and two tackles.

Elliott recognized by Big 12: Junior safety DeShon Elliott was honored as the Big 12’s defensive player of the week on Monday. Elliott intercepted USC star Sam Darnold twice, and he registered seven tackles and two pass break-ups. Elliott returned one of his interceptions for a touchdown.

Tom Herman’s off-week press conference: Some fire, fury … and even some Angry Birds after USC game

Where was Texas RB Chris Warren III against USC?