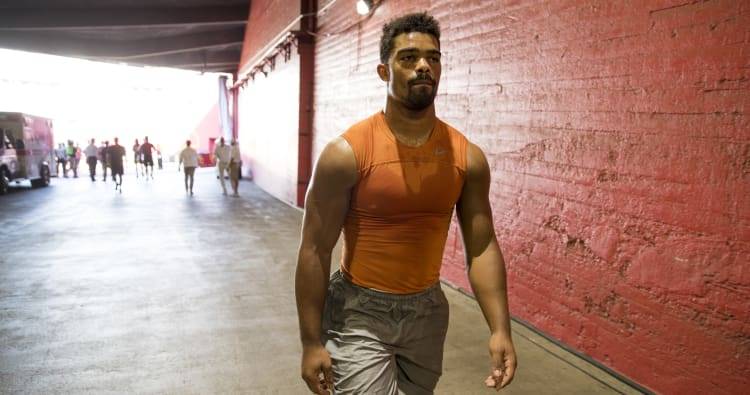 Beck and Ed Warinner were co-offensive coordinators at Ohio State in 2015. Ezekiel Elliott, who had rushed for more than 3,500 collegiate yards by that time, had just 12 carries for 33 yards in a stunning loss to No. 9 Michigan State.

“I deserve more than (12) carries,” Elliott said afterward in comments that rocked the Ohio State fan base. Elliott was so mad, he basically declared he was going pro. “I can’t speak for the play-caller. I don’t know what was going on.”

The following Monday, Ohio State coach Urban Meyer said, “I couldn’t disagreewith him. He should have gotten the ball more.”

Texas fans can empathize. Warren, a 250-pounder with 1,048 career yards, had only four carries for 15 yards against USC. He played the entire game despite suffering an eye laceration. Fellow running back Kyle Porter had five carries for nine yards.

Was there some specific reason why Beck and the Longhorns didn’t use Warren more against the Trojans?

“I don’t understand the question,” Texas coach Tom Herman said Monday. “Not using? How many carries did he have against San Jose State?”

Warren had 16 carries against San Jose State, but again, only four against USC.

“For 3.8 yards per carry, so, um, I think it’s difficult to… We’ve got to find a way to get him more yards,” Herman said. “But in the middle of a game, when you see how that is shaking out, the definition of insanity is repeatedly performing the same act, expecting different results.

“So to keep going back to 3.8 yards per carry, I think there would be some criticism there, too,” he added. “ ‘Tom why did you give Chris Warren the ball 20 times if he only had 70 yards.’ So I mean, you’re either damned if you do, damned if you don’t.

“When he’s not getting those yards, it doesn’t make much sense to keep going back to the well.”

USC’s primary rushing threat, Ronald Jones II, kept chipping away and had 18 carries for 47 yards — a 2.6 yards-per-carry average. The Trojans constantly jabbed at the Longhorns’ defensive front, going both up the middle and out wide, and finished with 71 rushing yards total.

No running back can build any momentum getting just one carry per quarter, or 1.25 carries per quarter, as in Porter’s case.

Meanwhile, Texas quarterback Sam Ehlinger, who started only because Shane Buechele had a bruised shoulder, was UT’s leading rusher with 19 carries for 10 yards.

This came two weeks after Buechele had a team-leading 15 carries in the season-opening loss to Maryland. Herman said there were supposed to be only a few quarterback run plays. That same day, Warren had just six carries for 31 yards. “We’ve got to do a better job of establishing the run game,” Herman said the following Monday.

So instead of ram-rodding Warren up the middle in double overtime against a worn-down USC defense, the Horns twice ran “quarterback power” with Ehlinger. Granted, he got 8 yards on first-and-10 from the USC 11-yard-line. He lost 4 yards on the second attempt and had the ball stripped away in a pileup at the USC 7.

“Where were they weakened? I didn’t see that,” Herman said. “And yeah, Sam made (eight) yards. We hadn’t had a running back make five yards up to that point. So nine yards inside the 15-yard line is a pretty good run.”

Beck is not made available to reporters after games, neither is defensive coordinator Todd Orlando. They usually meet with reporters on Wednesdays. Neither Warren nor Porter were made available after the game, either.

So when Herman looks at the final numbers, are nine combined carries for Warren and Porter an acceptable total?

“Oh no, I never said I was OK with it. No, not OK with that,” Herman said. “But I do think throughout the course of the game, you’ve got to do what you’re doing well. You can’t fix that kind of problem, I don’t think, in the middle of a game. That problem needs to get fixed this week and next week in practice.

“And we’ve already spent very little time watching the USC game,” he quickly added. “We’ve spent a lot of time talking about how we’re going to run the football better.”

Texas’ mercurial use of the running game may continue. All-American left tackle Connor Williams will be out an unknown amount of time with a knee injury. He’ll have surgery to repair a meniscus tear in the coming days.

Brandon Hodges left the program as a graduate transfer and went to Pittsburgh. Jean Delance didn’t think he was getting enough playing time and transferred to Florida in mid-August. Had he stayed, Delance might be a starter now, or at least be in the rotation.

Tristan Nickelson and Denzel Okafor are UT’s starting tackles for the foreseeable future.

There is next to no depth on the offensive line at this point. “We have five guys right now. Five. Five we feel good about putting in the game,” Herman said.

So what will Texas running game look like against Iowa State on Sept. 28?

“If we trained like we did the week leading up to USC and play the way we did during the two overtimes each and every week,” Herman said, “we’re going to be OK.”

The post Where was Texas RB Chris Warren III against USC? appeared first on Hook ‘Em.