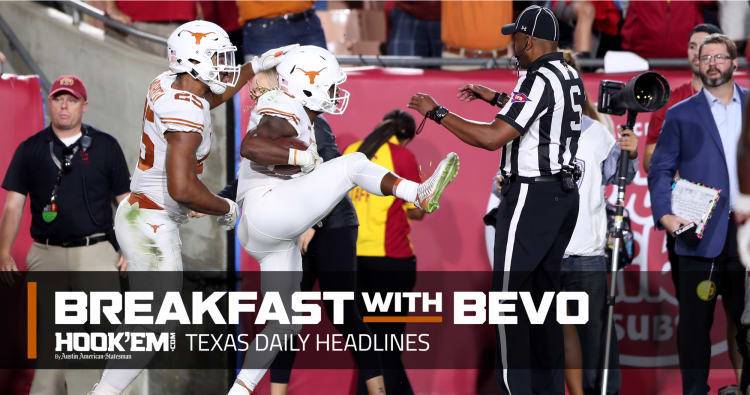 The bye week arrived at a good time for Texas wide receiver Armanti Foreman. It was announced Monday night that a sprained wrist will limit Foreman this week, but that he is expected to return to practice next week before Texas plays at Iowa State. The senior made 5 catches Saturday against USC for 38 yards, including a 17-yard reception that gave the Longhorns a 17-14 lead with 45 seconds left. Texas learned earlier that starting left tackle Connor Williams will need surgery to repair ligaments in his left knee.

Where was Chris Warren III?

Many Longhorns fans were miffed that running back Chris Warren III received only 4 carries on Saturday. Texas coach Tom Herman addressed those concerns during his Monday press conference, pointing to Warren’s 3.8 yards per carry average in the game as a reason why he didn’t get more touches. In UT’s two losses this season, Warren has carried the ball 10 times for a total of 46 yards.

Throughout the Texas-USC game, Fox cameras showed Herman chomping on gum and blowing bubbles during some intense moments on the sideline. He was asked about it Monday, and divulged which brand he’s popping and how many pieces he carries with him each half. The coach also talked about Jerrod Heard’s place on the depth chart moving forward and freshman Reggie Hemphill-Mapps’s ups and downs as a punt returner.

Texas safety DeShon Elliott had a career night Saturday against USC, and he got his due recognition on Monday. The junior was named Big 12 Defensive Player of the Week for his 7-tackle, 2-interception performance against the No. 4-ranked Trojans. Elliott turned one of his interceptions off USC quarterback Sam Darnold into a pick-six, and the other set up Texas on the USC 25-yard line.