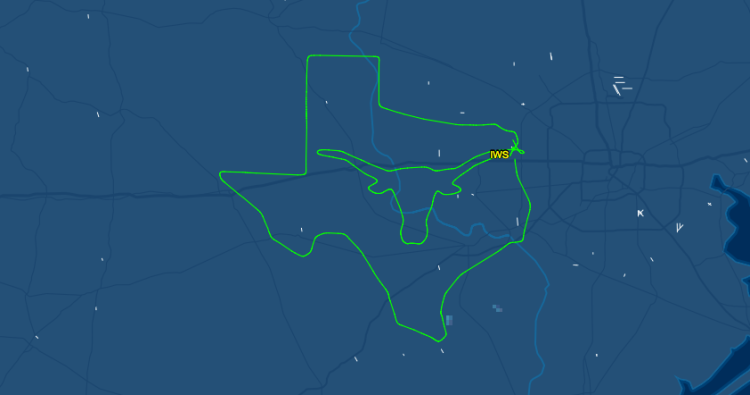 The Texas Longhorns have one of the most iconic logos in college football, and one ambitious pilot paid tribute to that this week.

FlightAware shared a photo Monday night of a flight path that almost perfectly mirrored the Texas logo, and the pilot put the outline of the state around the logo for good measure.

A Texas Longhorn inside the state of Texas, drawn over the skies of Texas. Can anybody top this? https://t.co/MguUpueyGl pic.twitter.com/Vv9DBa7DSB

According to FlightAware, the flight took off from West Houston Airport on Sunday at 4:39 p.m. The plane traveled 307 miles in two hours and 35 minutes before the plane before returning to West Houston. The plane in question was a Piper Cherokee and is owned by Cowlin Aviation.

It was a pretty cool showing of school pride just a few hours after Texas lost to USC 27-24 in double overtime. Despite the outcome, that game gave the Texas faithful something to believe in as the Tom Herman era gets underway.

Imagine how many more flight paths like this will crop up if the Longhorns upset No. 2 Oklahoma on Oct. 14.

WATCH: Tom Herman not in the best of moods with Chris Warren III, playcalling questions