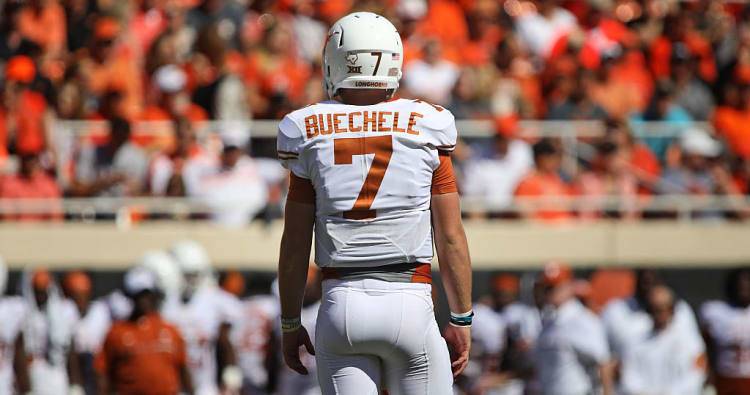 Just like he promised after the USC game, Texas coach Tom Herman said quarterback Shane Buechele took 60 percent of the practice repetitions with the first team and Sam Ehlinger took the rest.

“No Wally Pipp for the moment,” Herman said.

Herman had previously indicated Buechele would not lose his starting job to injury. On Saturday night even after Ehlinger almost slayed the Trojans, Herman said Buechele would be back in the lineup, provided he was healthy.

Buechele missed the last two games with a bruised throwing shoulder suffered in the season opener against Maryland.

“Thought both of them looked good,” Herman said of his two quarterbacks. “I asked Shane towards the end of practice and he said, ‘Coach I feel good.’ So we’ll continue to monitor his progress. Last week, he was a bit sore each day after throwing. But with a couple of days off here, hopefully we can get that soreness out.”

Pipp is remembered for having a headache in 1925 and once said he took the “two most expensive aspirin in history.” Pipp, a first baseman for the New York Yankees, was replaced in the lineup by Lou Gehrig, who played 2,130 consecutive games.

Buechele may still need a bit more rest, but otherwise, he’s likely to start against Iowa State on Sept. 28.

“One of the best things I’ve seen from Shane in the nine months I’ve been here was how hard he coached Sam Ehlinger in the USC game,” Herman said. “During the game, he was always by his side. He came off the field, and he was on the headset. He was coach Buechele for that game.”

As for Ehlinger, Herman said, “There’s a lot of improvement still to go, but we’re happy where he is and his development process for a true freshman.”

Third-stringer Jerrod Heard did not work at quarterback on Tuesday and spent the day with the receivers. “We haven’t talked about his package yet,” Herman said of Heard.

Imade back to offense: Redshirt freshman Tope Imade had shifted over to defensive line to provide depth on that side. On Tuesday, the Arlington Bowie product was back with the offensive line, the place where UT signed him to play in 2016.

“That’s going to be a crash course for him,” Herman said. “But he’s a big body that can, in an emergency by next Thursday, hopefully get in somebody’s way.”

The Longhorns are desperate to find anyone to bolster depth now that left tackle Connor Williams (knee) is out for several weeks, possibly even a month or more.

Herman said tackles Tristan Nickelson and Denzel Okafor both settled down as the game wore on against USC. “I’m not ready to count either of them as Anthony Muñoz just yet,” Herman said, referencing the Pro Football Hall of Famer.

Briefly: Texas practiced for about 90 minutes on Tuesday to kickstart the bye week. Herman said the team spent about 20 minutes working on Iowa State, the Longhorns’ next opponent.

Longhorns in the NFL: Week 2 marked by sacks and trade talks