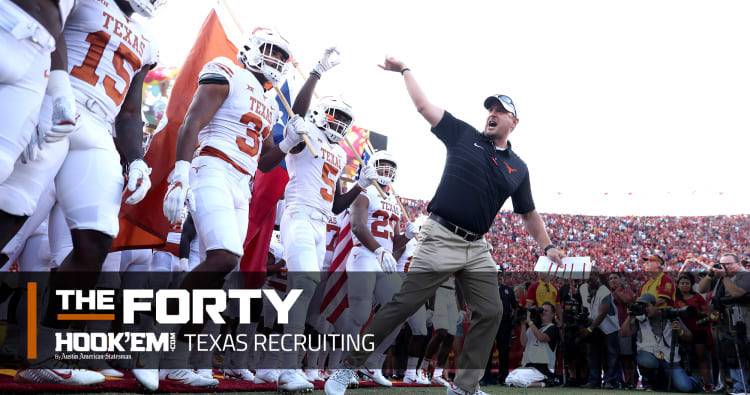 Perception becomes reality in the recruiting world. It’s not all about wins and losses, as the Longhorns are finding out following their double-overtime loss on the road to USC. Moral victories shouldn’t exist for storied programs like Texas. A loss is a loss.

I tell you what, I’m glad I’m apart of Longhorn family.

Tom Herman spent his first seven months working on Texas’ perception. He improved the locker rooms. He invested in a staff that understands the value of social media in today’s recruiting landscape and he built a 2018 class that’s ranked No. 2 in the country.

It all boiled down to a simple question: Why should Texas lag behind anyone in the country, whether on the field, in the locker room or in recruiting? The critics could point to the recent records. Herman instead pointed toward the future.

Recruits took notice and Herman made his point in the loss against USC. Texas is talented enough to play with any team on the schedule. Add a few elite recruiting classes and Texas becomes a program capable of competing with any team in the country.

Texas made the cut for 4-star slot receiver Jaylen Waddle of Houston Bellaire Episcopal. The 5-9, 175-pound playmaker, with an ability to create in open space that’s unmatched in Texas, is arguably the most explosive player in the state. The Longhorns, despite holding commitments from three other 4-star receivers, are still in the race.

ALL GLORY TO GOD

Room will be made for Waddle regardless of what happens at wide receiver in the 2018 class because he’s simply that good. Texas picked up a commitment from slot receiver Justin Watkins early in the cycle, but he de-committed. Texas rebounded with a commitment from 4-star Ronald Moore, another out-of-state prospect.

Alabama is considered the leader for Waddle. That might change if Moore looks for a school closer to home, like Purdue, leaving Texas without a slot for 2018. Waddle wants immediate playing time and likely wants to be the lone slot receiver taken by his school of choice.

Texas already holds a commitment at quarterback in the 2019 class, but nothing says the Longhorns won’t search out a second option if the quarterback is a good fit for the offense. Allen’s Grant Tisdale camped at Texas twice in the offseason and is off to a hot start as the quarterback at the state’s biggest high school. Tisdale doesn’t hold a Texas offer as of now, but he was watching Saturday when Texas pushed USC to double-overtime.

WATCH: Tom Herman not in the best of moods with Chris Warren III, playcalling questions