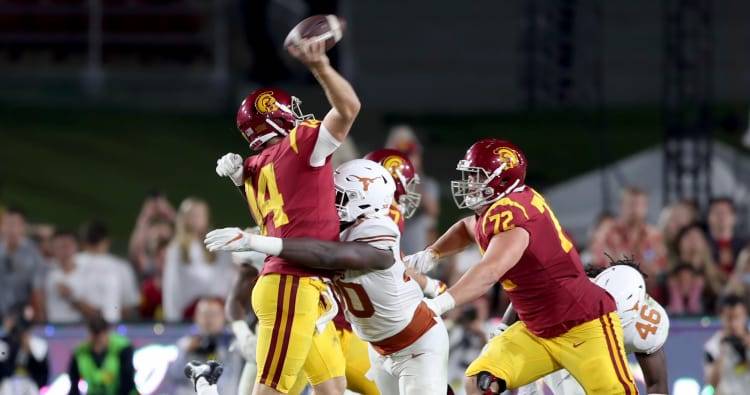 In its 27-24 double-overtime loss to No. 4 USC last weekend, the Texas defense put together one of its better performances in recent memory. Four days later, Texas defensive coordinator Todd Orlando said a quartet of his defensive linemen stood out against the Trojans.

Orlando praised the play of defensive end Chris Nelson and nose tackle Poona Ford, who arrived in Texas in 2014 as members of Charlie Strong’s first recruiting class. The 305-pound Ford, who is one of the team’s four captains, recorded four tackles. Nelson had two tackles.

Orlando wondered aloud why he hadn’t seen that from Nelson and Strong this season. He summarized that the coaching staff was learning how to get the best out of the players and vice versa.

“Like I told you guys beforehand, I’ve been expecting those guys to make a whole bunch of plays,” Orlando said. “That was the Poona that showed up in fall camp. The TFL Poona, the guy that was chasing the quarterback. Chris, the same way.”

Orlando said the coaches needed to set up defensive end Charles Omenihu more because “he’s proved to us that he can be an elite pass rusher.” Omenihu, who Orlando said needs to improve against the run, registered a seven-yard sack of USC quarterback Sam Darnold. Malcolm Roach, who led a fourth-down stop at the goal line, was described as someone “that needs to play a lot more.”

Ronald Jones II takes the pass and goes 56 yards to the house as time expires in the first half! #USC leads 14-7! #TEXvsUSC pic.twitter.com/M1dnaLBY8x

Broken equipment: Orlando did not seem to express much regret about the play-calling on USC’s game-tying drive at the end of regulation. Orlando said there appeared to be some hesitancy among the Longhorns, but the team maintained its aggressiveness. Darnold, though, “made a couple tremendous plays.”

Orlando directed more of his ire toward the last play of the first half. USC running back Ronald Jones II turned a mid-range pass into an untouched touchdown that covered 56 yards and a 14-7 halftime lead. Texas was playing in a prevent defense at the time. Defensive back Holton Hill, however, slipped and missed a tackle on the play, which Orlando referred to as “gut-wrenching.”

“That play, you talk about anger,” said Orlando, who said he shattered his headset on the play. “Past anger, I couldn’t describe my emotions right there. I lit up.”

Keeping the faith: Offensive coordinator Tim Beck said that junior running back Chris Warren III had earned his confidence. Warren rushed for 166 yards two weeks ago against San Jose State, but was given only four carries against USC.

Beck conceded that the play-calling for UT’s running game had been inconsistent. He, however, said Warren had become a “marked man” and USC’s defense was stacking the box in an effort to stop him.

“We’re just back to the drawing board,” Beck said. “Keep trying to find the best [way to] help our football team and get the ball to those guys and figuring out where we can run it.”

The Whys of Texas: Questions galore about Chris Warren, going for 2 and those Pac-12 refs