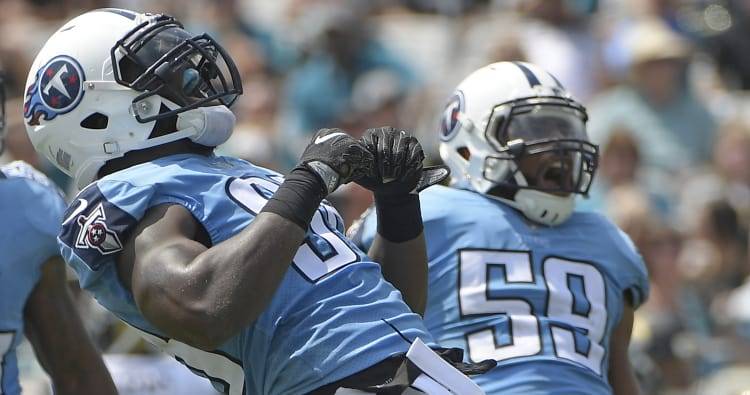 Brian Orakpo and the Titans picked up their first win of the season, dominating the Jaguars 37-16. Orakpo made four tackles and a sack in the win. He hit the quarterback twice and for the second straight week he forced a fumble.

Orakpo (@rak98) with the strip sack of QB Blake Bortles

Kenny Vaccaro and the Saints have had a rough start to the NFL season. What’s interesting is that word broke early Sunday, via NFL Network’s Ian Rapoport, that New Orleans was looking for a trade partner for the fifth-year safety. Vaccaro was even pulled from Sunday’s loss to the Patriots after the defense got torched early and often. Vaccaro had five tackles in the loss. After the game he admitted that the defense hasn’t been up to par during his first four years.

Jamaal Charles, RB, Broncos—Charles looks like he’s going to be a nice change of pace for the Broncos. He rushed nine time for 46 yards in the 42-17 win over the Cowboys. He caught his only target for six yards.

Phil Dawson, K, Cardinals—Dawson scored the game-winning field goal in overtime as he connected on a 30-yarder. The veteran was 3-for-4 on the day, hitting a long of 40 yards in the win.

D’Onta Foreman, RB, Texans—The rookie was expected to play more in Week 2 and that he did. He carried the ball 12 times for 40 yards in the Texans’ 13-9 win over the Bengals last Thursday.

Hassan Ridgeway, DT, Colts—The defensive tackle logged his first sack of the season as the Colts fell to the Cardinals in overtime.

Quandre Diggs, CB, Lions—Diggs had another solid performance as he helped the Lions beat the Giants 24-10. He had three tackles in the win. One of his tackles was a big stop as the Giants attempted to convert on fourth down late in the game.

Jordan Hicks, LB, Eagles—Hicks hit the quarterback twice and made three tackles for the Eagles, though they fell 27-20 to the Chiefs.

Earl Thomas, S, Seahawks—The Seahawks got their first win as they topped the 49ers 12-9. Thomas had three tackles in the win.

Derrick Johnson, LB, Chiefs—Johnson and the Chiefs moved to 2-0 after defeating the Eagles 27-20. Johnson had two tackles in the win, one of those tackles went for a loss.

Roy Miller, DT, Chiefs—Miller didn’t record a tackle in the Chiefs’ win but he had a pass deflection.

Malcom Brown, DT, Patriots—Brown had just one tackle in the Patriots big win over the Saints. He helped hold New Orleans to just 81 yards rushing.

Marquise Goodwin, WR, 49ers—Goodwin led the 49ers in receptions and yards. That’s the good news. The bad news is he had just three catches for 26 yards.

Trey Hopkins, OG, Bengals—The former Longhorn didn’t play in Thursday’s loss to the Texans as he recovers from a knee injury.

Alex Okafor, DE, Saints—The Saints defense had another poor outing but Okafor finished with four tackles, a tackle for loss and a quarterback hit.

Adrian Phillips, CB, Chargers—Phillips made two tackles, but the Chargers once again lost a close contest. They fell 19-17 to the Dolphins.

Justin Tucker, K, Ravens—Tucker went 1-for-2 on field goals and made all three extra points. He tried a 58-yarder in the second quarter.

Brian Robison, DE, Vikings—Robison recorded his first tackle of the season, but the Vikings couldn’t muster much offense, falling 26-9 to the Steelers.

Sam Acho, LB, Bears—Acho made three tackles in the 29-7 loss to the Buccaneers.

Fozzy Whittaker, RB, Panthers—Whittaker didn’t have a touch in Sunday’s 9-3 win over the Bills.

Marcus Johnson, WR, Eagles—He didn’t record a stat as the Eagles fell to the Chiefs.

Colt McCoy, QB, Redskins—McCoy didn’t get into the game as the Redskins got the 27-20 win over the Rams.

Malcolm Brown, RB, Rams—Brown had a game to forget as he didn’t get a carry and his only touch was a catch for minus-4 yards.

Keenan Robinson, LB, Giants—The linebacker didn’t play in the the Week 2 loss to the Lions due to a concussion suffered on Aug. 3.

The post Longhorns in the NFL: Week 2 marked by sacks and trade talks appeared first on Hook ‘Em.

Shane Buechele back in the saddle; reaction to Tom Herman’s ‘primal screams’