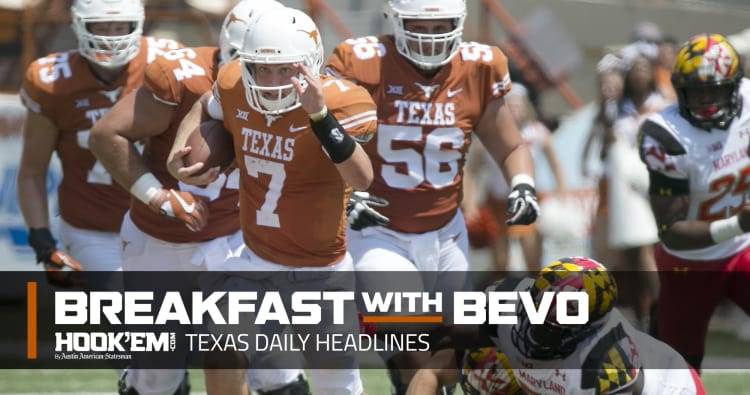 No Wally Pipp for the moment

Shane Buechele took 60 percent of the first team snaps in practice Tuesday. It looks like the sophomore quarterback won’t be losing his job because of injury after freshman Sam Ehlinger put up a strong effort against the USC Trojans last Saturday. Buechele is feeling good and looks to avoid the same fate as Wally Pipp, a first baseman for the New York Yankees best known for being replaced by Lou Gehrig.

Here’s an annotated transcript of Tom Herman’s press conference with every question and every full answer. In addition, there are staff thoughts on what he said, coming from Kirk Bohls, Cedric Golden, Brian Davis and others.

Tom Herman may not have shed a tear after the heart-breaking loss to the Trojans on Saturday, but he had a louder way of expressing his frustration. A few folks on Twitter had a little fun with the visual. Golden talks about that frustration and looks forward to the Longhorns’ next opponent, Iowa State. He also ponders whether or not Connor Williams should enter the NFL draft after suffering an injury Saturday.

Columnists Kirk Bohls and Cedric Golden talk Herman and Chris Warren III in their Longhorn Minute following Herman’s press conference. After the bye this week, is the Iowa State game something that should concern the Longhorns?

There are no moral victories … unless a recruit is impressed

When Texas showed it has the talent to hang with one of the best teams in the country Saturday, recruits took notice. Recruiting writer Mike Craven provides reaction to the double overtime loss to USC. Take a look into the Texas recruiting world at The Forty.

It looks like Sam Ehlinger earned one after nearly guiding Texas to a major upset over USC last Saturday. Surely Ehlinger would have preferred to win the instant classic, but he at least earned the respect of one of college football’s best players.

The Denton A. Cooley Pavilion got an updated look that the University shared online Monday. Current NBA stars that played at Texas hold a big presence, hanging above Dozier Court. The same company that installed the new lockers for the football team designed the ones at Cooley Pavilion.

Micaya White had 17 kills to lead Texas to a sweep of the UTSA Roadrunners in San Antonio on Tuesday. The win moves the No. 6 Longhorns to 8-2 as they prepare to open Big 12 play this weekend.

The post Shane Buechele back in the saddle; reaction to Tom Herman’s ‘primal screams’ appeared first on Hook ‘Em.

Longhorns in the NFL: Week 2 marked by sacks and trade talks

The real commitments in Texas recruiting: All moms are five-stars