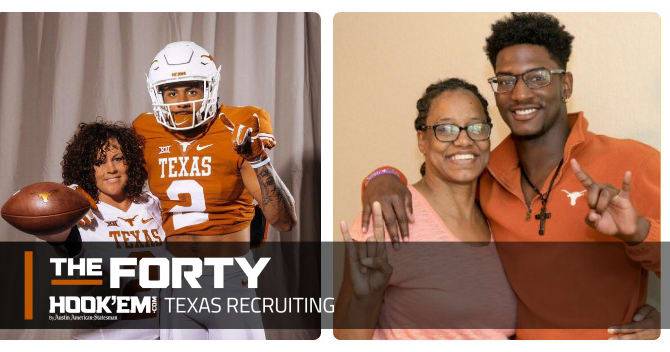 The real stars of the show

The cool kids’ table at this summer’s Stars at Night recruiting event hosted by Texas wasn’t reserved for 2018 commitments like Caden Sterns, B.J. Foster, Reese Moore and Byron Hobbs. The real stars were the mothers, and if you follow Texas recruiting closely enough on Twitter, the cast of characters are familiar names, if not faces.

The Alpha Mom sorority is strong throughout the 2018 class. It started at the Orange-White game when Hobbs’ mom, Natalia, took it upon herself to talk to the other parents in attendance. Natalia is a self-described firecracker who has no issue with speaking her mind. Follow her Twitter account and that becomes apparent.

Say what you want USC had to fight for this one!! Proud of OUR Longhorns!!! They didn’t give TX credit and they showed y’all asses! 🤘

“Reese wasn’t even committed yet and Natalia was chatting with us,” said Kathy Moore, mom of Seminole offensive tackle commit Reese Moore. “All the boys were sitting together, so the moms starting sitting together. In West Texas, your friends are the parents of your kid’s friends. We thought we would lose that when Reese went to Texas.”

Natalia and the other moms aren’t allowing that to happen. A web of mothers across the state are adopting new children, and all those children are preparing to play for Texas. It’s not only to benefit the mom’s social circles. The network was built to help each kid feel like home in any city.

The Moores already plan on hosting quarterback commit Cameron Rising for Thanksgiving and other holidays because Rising will have trouble traveling back to California during the football season. Natalia is thinking about building bunk beds in Byron’s room when he leaves so that more players can stay at their house during holidays or trips to the Dallas area. Caden Sterns’ mom, Brandi Biddy, lives only an hour away from campus.

Momma bears looking out for their Longhorns. There is a ring to it.

“My son feels like he is gaining a bunch of brothers,” said Yolanda Royston, mother of five-star safety B.J. Foster. “It is nice to build those relationships. Most of us get to know each other because of the elite camps in the offseason and at junior days at different colleges.”

The new age of recruiting is not only building cliques among prospects. It’s apparently creating cliques among the parents, and it’s also bringing adults together who normally wouldn’t interact. At the Stars at Night event, Moore — a Texas Tech grad who has spent most of her life in West Texas — set next to Natalia, Yolanda and a host of the other mothers from different parts of the state.

“It’s amazing how much we all have in common,” Moore said. “Caden’s mom, Brandi Biddy, has two boys who are the exact same age of my boys. We’re all moms of football players. We share similar experiences.”

Dealing with recruiting as a mom

Their kids live similar lives in the recruiting spotlight. Most of them grew up as the best athlete in their age group. Now, all of them live in a world without silence. Coaches and reporters hound these prospects daily. A mom notices the toll it takes.

“The coaches started hounding me and it gave me a perspective of what these kids go through,” said Brennan Eagles’ mom, Kim. “He went from no offers to 30 offers quickly. It all happened so fast. It was fun at first but I could tell it was taking a toll, even if Brennan never mentioned it. It’s hard not to get caught up in the hype.”

Hype is an easy trap for a teenager. Recruits are told they’ll change a program before ever arriving on campus. The 2018 class especially, since it’s considered Texas’ first full-cycle class under Tom Herman. The class currently ranks second in the nation and first in the Big 12.

It helps to have experience during the process, but the change with Twitter and social media makes it tough even for a mom who’s gone through this before. Sterns’ older brother, Jordan, signed with Oklahoma State out of Cibolo Steele and is now a member of the Kansas City Chiefs.

It still didn’t prepare her for the attention that Caden would receive as a four-star defensive back.

“Recruiting changed so much with the advent of Twitter and all the text messages coaches can send now,” Brandi said. “Jordan wasn’t recruited in the same way as Caden. He would hear from multiple coaching staffs every day. It was overwhelming.”

Recruiting a mom is always a priority for a coaching staff. Most men are momma’s boys. A mother’s input means a lot, and coaching staffs understand the importance of keeping mom happy. Herman’s staff makes it a point to include parents in the recruiting process.

“Texas did a great job including me,” said Al’vonte Woodard’s mom, Rochelle Mayes. “They listened to my concerns and wants out of a college. They wanted my input and considered my feelings. He’s my baby boy, no matter how old he is. I feel comfortable with him at Texas for three to four years, especially with the support of all the families in this recruiting class.”

Win over mom and a recruit usually follows. It’s a simple rule in recruiting, and in life. It might be the prospect who announces the decision on Twitter, but the mom tends to know what their kid wants long before a decision is made.

“I can’t tell the difference from the first time we visited Texas with Tom Herman in charge from the sixth time we visited. The consistency is amazing,” Natalia said. “Those coaches include the parents. There is a constant line of communication and energy with the head coach and the assistants.”

It’s clearly working. Kim Eagles watched the staff grow closer with her and her family, and it led to the 4-star receiver choosing the Longhorns.

“Coach Drew Mehringer took the time to get to know Brennan on a personal level and it worked,” she said. “It is always a family feel at Texas. It isn’t just about how talented he is and what he can do for the Texas football team. They talk to us about what Texas can do for our kids.”

At the end of the day, these mothers are allowing Herman and his staff control of their kids for the next four or five years. It’s a huge responsibility for the coaching staff. It’s also a tough position as a mother, and one that requires real research on the coaches who want to help these young prospects become men on and off the football field.

“I’m putting my kid in their hands to co-parent for the next few years,” Kim Eagles said. “Regardless of if he is healthy or an asset to the team down the road, will he still get a degree? Will he still have a network to use after college? Those were my concerns and Texas answered them.”

The post The real commitments in Texas recruiting: All moms are five-stars appeared first on Hook ‘Em.

Shane Buechele back in the saddle; reaction to Tom Herman’s ‘primal screams’

The Whys of Texas: Questions galore about Chris Warren, going for 2 and those Pac-12 refs