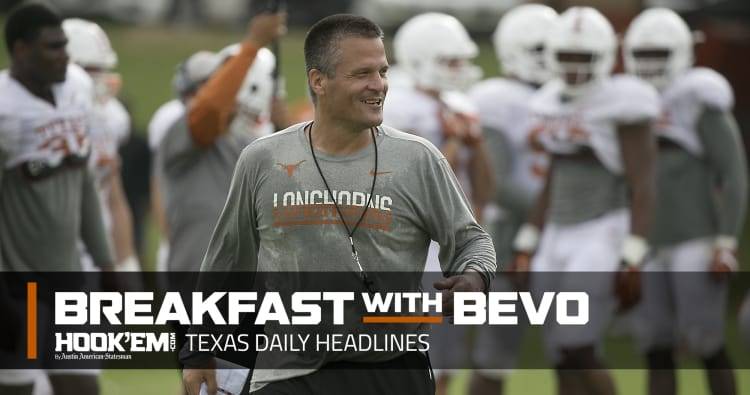 Bohls’ 9 things and one crazy prediction

In this edition of 9 things and one crazy prediction, columnist Kirk Bohls relays what he heard from USC’s athletic director, Lynn Swann. The former wide receiver for the Trojans and Pittsburgh Steelers said he thought the Texas market made a lot of sense for the Pac-12. Bohls also discusses the options in front of injured Longhorns left tackle Connor Williams.

Texas defensive coordinator Todd Orlando finally saw what he expected out of the defensive line in the Longhorns’ game against USC last Saturday. Orlando expected to see Poona Ford make plays and he did. Orlando also believes defensive end Charles Omenihu can be an elite pass rusher. Of course, Orlando wasn’t happy with the end result of the game, but what drew most of his anger was the final play of the first half.

The real stars of the recruiting world

In this edition of The Forty, recruiting writer Mike Craven brings attention to some recruits’ mothers that often hold the key to where a recruit may end up. Winning mothers over is essential to drawing talent to the program. Craven catches up with a few of these moms. Some of them love to speak their minds on social media.

The Whys of Texas: Near Upset of USC Edition

Longhorns beat writer Brian Davis takes another dive into the mailbag this week. Many fans weren’t shy about expressing their displeasure of the Longhorns’ near upset of USC. Readers had questions about the lack of a running game, the Pac-12 officials and the decision to not go for two after scoring a touchdown in the first overtime.

Five years into her tenure at Texas, coach Angela Kelly has the Longhorns playing perfect soccer. With Big 12 play starting Friday, the 17th-ranked Longhorns are 8-0, one of only two unbeaten and untied teams left in the country. Kelly is no stranger to perfection. She was a member of the North Carolina squad that won 83 straight games and four national titles.

The Week 4 guide to watching Texas commits in action