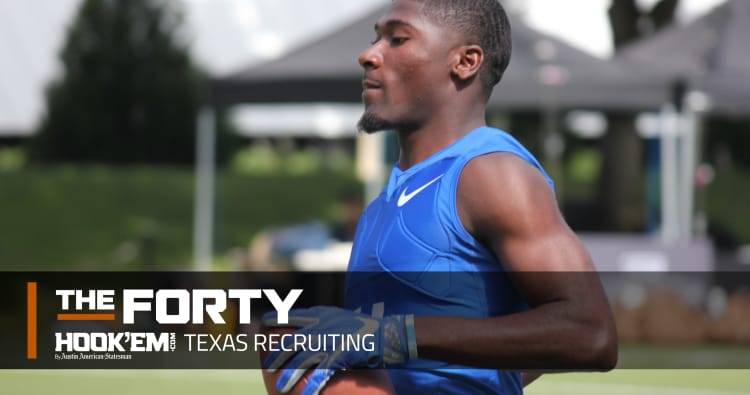 Football is officially back throughout the state after action resumed as scheduled in Week 3 after delays due to Hurricane Harvey. All 18 of Texas’ 2018 commitments were in action. The only commitment not in action this weekend is DeMarvion Overshown because Arp is on a bye.

Fort Worth Eastern Hills at Richland

Newbury Park and 4-star quarterback commit Cameron Rising are 2-2 on the season heading into a road game against Venice. Rising has thrown for 845 yards and 9 touchdowns to 2 interceptions, completing more than 62 percent of his passes. He’s added 213 yards rushing a touchdown on the ground.

Moore continues to put up video game numbers as a senior on one of the nation’s top high school teams. Trinity moved to 4-0 and Moore registered 18 catches for 242 yards and three touchdowns. The big news of the week is that Moore is planning a trip to Purdue on Saturday.

Thompson transferred schools over the summer, following his former offensive coordinator, Jeff Brickman, from Southmoore High to Newcastle and the group is still searching for its first win. Through three games, Thompson has 814 yards passing and 286 yards rushing. He’s accounted for 7 touchdowns and thrown 4 interceptions.

Adeoye continues to see limited action in his senior season at IMG Academy.

Arizona Western College hopes to become 3-0 with a home game against Eastern Arizona on Saturday. Wood-Anderson recorded 3 catches for 54 yards through two games.

Miss a previous edition of The Forty? Get caught up here

The post The Week 4 guide to watching Texas commits in action appeared first on Hook ‘Em.

Sound Off: Grading Sam Ehlinger and the Texas defense after the USC game