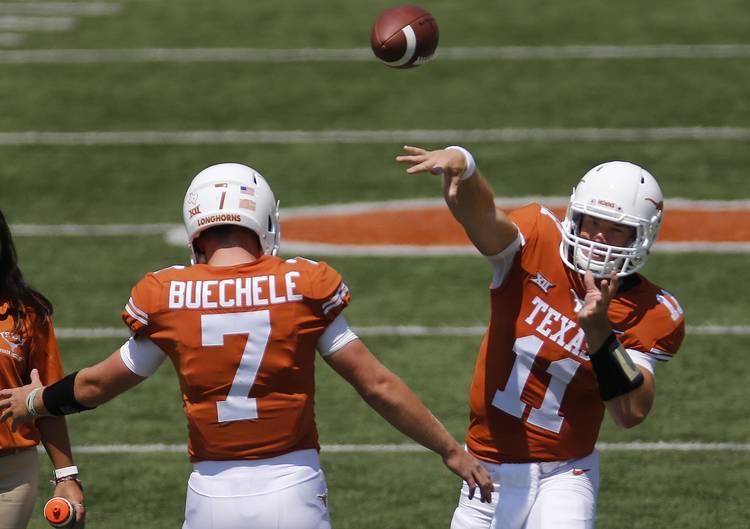 First came a stunning season-opening loss to Maryland. That was followed by a 56-point blowout over overmatched San Jose State. Then Texas played inspiring, double-overtime football against No. 4 USC but still came up short.

At 1-2, do these Longhorns have a firm grasp on where this season is headed?

“I think we do. We know for sure,” safety DeShon Elliott said. “I can’t let you know, but we know.”

Will these Longhorns compete for a Big 12 championship? Will they reach a bowl game? Or, could they finish with yet another losing record. At this point, every option is still on the table, and nobody can say for sure what this thing will look like come November.

You could build a strong argument that Texas could win or lose the remaining nine regular-season Big 12 games and be right. Or wrong. Part of the fun is the journey itself, obviously, which begins Thursday at Iowa State (2-1, 0-0 Big 12).

“This was definitely a teaching week for us,” linebacker Malik Jefferson said. “Guys understood that we lost, and your expectation is to win. People give us pats on the back, but it honestly means nothing. The record shows and the game shows a different score.”

History shows that Texas fans can’t really read anything into a new coach’s 1-2 start. It’s happened far more frequently than one might imagine:

David McWilliams (1987): McWilliams had the unfortunate luck of starting his UT career against No. 5 Auburn. Bret Stafford had a hard day at the office, throwing two interceptions and never completing a pass longer than 19 yards. Auburn cruised to a 31-3 win.

The next week, Texas fared better but ultimately lost to BYU. Darron Norris and Eric Metcalf combined for 163 yards, but Stafford was sacked five times.

McWilliams finally broke through the following week against Oregon State, crushing the Beavers 61-16. Texas ultimately knocked off No. 15 Arkansas in Little Rock and beat No. 18 Pittsburgh in the Bluebonnet Bowl to finish 7-5. The Horns were on their way, right?

John Mackovic (1992): Mackovic stumbled out of the gate, too, losing to No. 21 Mississippi State in his debut. Jackie Sherrill, once the coach at Texas A&M, won his seventh straight over Texas sparked by Keith Joseph’s interception of UT’s Peter Gardere. A 1-yard touchdown run sealed a 28-10 win for MSU.

Texas had a 21-13 lead in the third quarter over No. 9 Syracuse the following week. But Orange quarterback Marvin Graves completed 11 of 18 passes for 284 yards as the Longhorns lost 31-21 and sat 0-2.

Finally, Mackovic got a victory and got the ball rolling. In his third game at UT, Mackovic drew North Texas and UT had an easy 33-15 win. That kick-started a five-game winning streak as Texas finished the year 6-5. Like McWilliams, Mackovic had a 5-5-1 season in 1993 and an 8-4 mark in 1994.

In 1995 with James Brown at the controls, Texas won the final Southwest Conference championship and reached the Sugar Bowl with a 10-2-1 record. Texas won the inaugural Big 12 championship the following year against No. 3 Nebraska in St. Louis.

The previous year, UCLA hung 66 points on Texas in a loss that triggered Mackovic’s dismissal. And the Bruins were ready again for the rematch in Los Angeles. Ricky Williams scored three touchdowns in the fourth quarter alone and piled up 160 yards, but UCLA still came away with a 49-31 win.

It didn’t get any better the following week against No. 5 Kansas State. Coach Bill Snyder welcomed Brown to the Big 12 with an emphatic 48-7 loss. Brown started 1-2, like McWilliams and Mackovic before him.

Texas picked up wins over Rice, Iowa State, Oklahoma and Baylor. The real breakthrough came in a 20-16 win at Nebraska. Williams ran for 150 yards as Major Applewhite threw two touchdowns — including one to Wane McGarity with 2:47 remaining — in a stunning upset of the seventh-ranked Huskers.

Nebraska fans gave Williams and the Longhorns a standing ovation. Texas finished the year 9-3 and Brown’s program was off and running. The Longhorns had nine consecutive 10-win seasons from 2001-09 and won the 2005 national title.

Charlie Strong (2014): Strong opened with a 38-7 win over North Texas but lost quarterback David Ash in the process to a career-ending concussion. The next week, Taysom Hill ran through, around and literally jumped over the Texas defense as BYU cruised to a 41-7 victory.

The next week, Texas opened with a coin-flip fiasco against UCLA that cost the offense an extra possession. A big punt return followed by a stop-and-go touchdown catch helped UCLA grab a 20-17 win in Arlington.

Herman’s first team this season can go any which way. Trying to project it out may be a fool’s errand.

“If we train like we did the week leading up to USC and we play like we did during that game and in the two overtimes,” Herman said, “if we can do that each and every week, we’re going to be OK.”

The post As Big 12 play begins, which way is 1-2 Texas headed under Tom Herman? appeared first on Hook ‘Em.