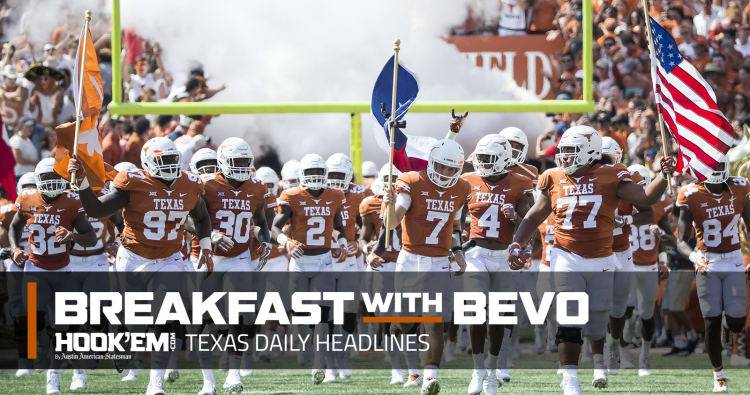 Recruiting writer Mike Craven offers up his guide to tracking high school athletes committed to playing football at UT. Only one member of the the 2018 Texas recruiting class is off this week. Craven is also keeping tabs on out-of-state talent committed to Texas. On Thursday, Craven was at the Houston Heights game against Katy Tompkins, keeping an eye on the Fab 55’s top recruit Jalen Green. Coach Tom Herman was also in attendance.

Texas beat writers Danny Davis and Brian Davis talk USC among other topics in this episode of Sound Off. The Davis duo recaps the Texas effort against USC, covering the defensive performance, Sam Ehlinger and Chris Warren III. In addition, they touch on injury issues the Longhorns are facing heading into the bye week before facing Iowa State.

Eyes on Texas: No moral victories

Tom Herman says there are no moral victories in college football. In order to pursue championships, the Longhorns must follow Herman’s lead, says Texas beat writer Brian Davis. The Longhorns can appreciate the improvements they’ve made from Week 1, but they can’t lose sight of the fact that they’re 1-2.

Texas junior soccer player Nakia Graham doesn’t like too much attention but has an interesting story. The daughter of an Olympian, Graham has played in seven games thus far in UT’s program-best 8-0 start. Her mother competed at the World Indoor Track Championships and her brother ran track at Texas A&M. Even her younger sisters are tennis players. Kiana Graham won the Class 6A singles state title last year as a freshman at Westwood.

With a new basketball stadium still a few years away, the University of Texas has decided to upgrade the current facility. The University will upgrade the Frank Erwin Center and Denton A. Cooley Pavilion at a cost of $4.5 million. The improvements will be completed before the start of the upcoming men’s and women’s seasons. Texas men’s athletic director Mike Perrin says the upgrades show a commitment to both basketball programs.

The Longhorns volleyball team is growing up on the court. Middle blocker Orie Agbaji, Lexi Sun and Micaya White each celebrated a birthday in the last month. Agbaji’s came in a win over Texas A&M-Corpus Christi on Sept. 7 while Sun celebrated her 19th birthday during a sweep of UTSA on Tuesday. White had a birthday a day later. Autumn Rounsaville will celebrate her birthday as the Longhorns open Big 12 play on Saturday.

Texas football program valued at more than $1 billion, per the Wall Street Journal.