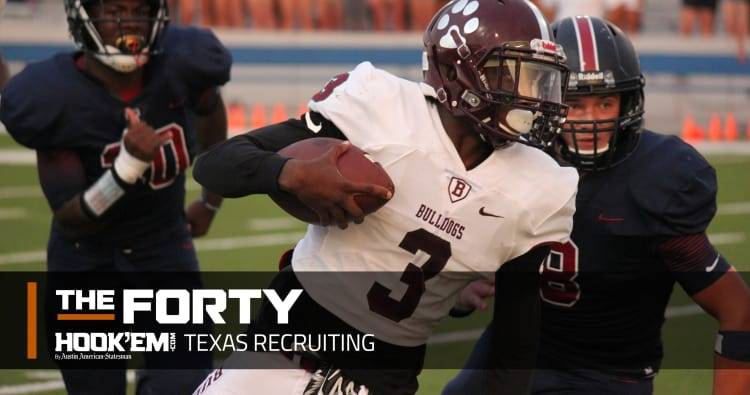 A bye week is a misleading term. There is no such thing for college football coaches. Texas coaches are using this open weekend to travel the country and visit commitments and targets in the 2018 and 2019 classes. Tom Herman, along with his staff, will be represented at numerous games throughout the weekend.

Herman himself showed up to the Houston Heights contest Thursday night to watch 4-star cornerback commit Jalen Green in person. He also made it to Katy Taylor’s game against Fort Bend Austin to watch 2018 defensive end and current Texas A&M commit Max Wright along with 2019 defensive end target Brandon Mowry.

The staff also made stops at Thursday’s Spring Dekaney-Klein Oak game to watch 2018 commit Malcolm Epps and 2019 target Marcus Banks, a 3-star defensive back holding a Texas offer. Arguably the top offensive target in 2019, Kenyon Green, also was watched by the staff Thursday when Humble Atascocita took on Klein Collins.

Coaches also will travel out-of-state to watch commitments Cameron Rising in California and Ayodele Adeoye at IMG Academy in Florida, which is also the home of 2019 running back target Noah Cain. Texas also plans to catch 5-star 2018 quarterback target Tanner McKee while in California.

The No. 1-ranked player on the Fabulous 55 showed off his versatility in front of Herman and defensive backs coach Jason Washington in Thursday’s 27-21 win over Katy Tompkins. Houston Heights trailed by 14 points in the second half before a touchdown catch and a touchdown run by Green provided enough points for the Bulldogs to take home the win.

“It was all the offensive line,” Green said after the game. “We just kept playing and competing. We weren’t worried about the score until the game ended.”

Green is a 4-star cornerback but played multiple positions: Quarterback, running back, wide receiver, cornerback and punter. It’s a role he relishes, not because of the amount of time he spends on the field, but because of the impact he has on the team.

“I don’t care where I play. My job is to help us win just like everyone else on the team,” he said. “We did a great job.”

Green was a full-time quarterback until his sophomore season. That’s the same year he met Herman, who was then the head coach at Houston. Herman offered Green and the two continued their relationship once Herman moved to Austin. It resulted in a commitment from Green.

“Our relationship is tremendous,” Green said of Herman and his staff. “They’re the reason I committed to Texas.”

The 2018 class is stacked with talent and ranked second in the nation. Cornerback remains a need for the Longhorns heading into October and the two main targets are teammates at Houston Lamar, which is also the home of current 4-star wide receiver commit Al’vonte Woodard. The Longhorns will be in attendance for Lamar’s game Friday night to watch the trio in person.

Cook is set to announce his college decision on Oct. 30 and he’ll choose between Texas, Ohio State and LSU. Ohio State is believed to be the favorite with Texas hoping to make up ground in the next five weeks. The Longhorns received a boost when Cook announced he’ll visit Texas on Sept. 29.

Jamison, a fellow Fabulous 55 member, is set to announce his decision on Oct. 14 with Texas in a strong position and TCU in the mix.

As Big 12 play begins, which way is 1-2 Texas headed under Tom Herman?