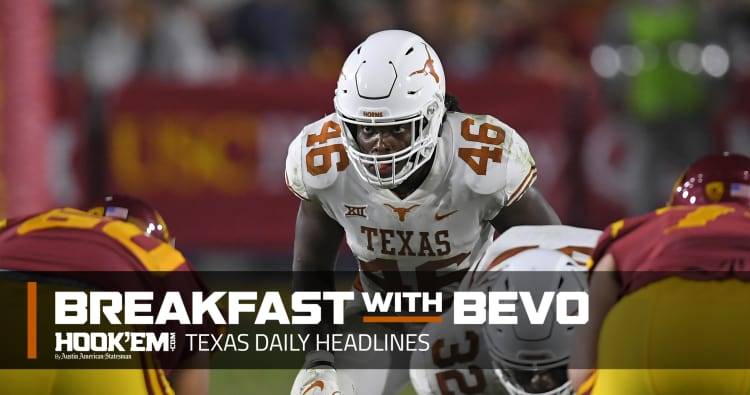 As Texas prepares to start play in the Big 12 Conference on Thursday at Iowa State, the Longhorns’ fate for the rest of the season is still wide-ranging.

Could a loss in Ames on Thursday send Texas spiralling to a fourth consecutive losing season and out of the bowl picture? Or perhaps a win Thursday paired with a home win over Kansas State to start October will give the Longhorns momentum to topple either a ranked Oklahoma or Oklahoma State side? The Austin American-Statesman’s Brian Davis takes a look at where the 2017 Longhorns could be headed. One thing’s for sure: all options are still on the table.

Bishop Dunne’s Brian Williams posted his six finalists for his commitment, and the Longhorns survived the cut, being named one of six programs that the Metroplex star is considering for his signature as part of the 2019 class. Texas was listed with Oklahoma, Notre Dame, Nebraska, Arkansas and Stanford. There is no timetable for Williams’ commitment to a school.

Williams unofficially visited Austin just months ago on June 16 and later made a return trip on July 21. To date, Texas holds four of his six Crystal Ball projections.

As a sophomore, Williams tallied 78 tackles, 8 interceptions and 6 pass breakups.

The Longhorns soccer team continued its undefeated run to start the season with a 1-0 win over No. 5 West Virginia Sunday. Sophomore Cyera Hintzen scored the match winner with a little more than two minutes remaining, as the Longhorns handed the Mountaineers only their second conference loss since joining the Big 12 in 2012.

Texas left tackle Connor Williams tore his meniscus and sprained his MCL and PCL in his left knee during the game against USC, injuries that will require surgery. That has a lot of people wondering: First, will he return this season? Next, how does this affect Williams’ draft stock?

At least for now, not much appears to have changed.

ESPN draft guru Todd McShay released his updated list of the top 32 prospects earlier this week, and Williams showed up at No. 9. He was the top offensive lineman included.

Junior Malik Jefferson joined Williams on the list. The linebacker is ranked No. 22 overall, down one spot from where he was in the preseason.

The No. 1-ranked player on the Fabulous 55 showed off his versatility in front of coach Tom Herman and defensive backs coach Jason Washington in a 27-21 win over Katy Tompkins last week. Houston Heights trailed by 14 points in the second half before a touchdown catch and a touchdown run by Jalen Green provided enough points for the Bulldogs to take home the win.

“It was all the offensive line,” Green said after the game. “We just kept playing and competing. We weren’t worried about the score until the game ended.”

Jalen Green is a 4-star cornerback but played multiple positions: quarterback, running back, wide receiver, cornerback and punter. It’s a role he relishes, not because of the amount of time he spends on the field but because of the impact he has on the team.

Micaya White once again led the Longhorns in kills, hitting home 16 with a .297 hitting percentage. She also added a season high in digs with 15.

Lexi Sun and Chiaka Ogbogu each had 13 kills in the win. Ogbogu had no hitting errors in the game on the way to a hitting percentage of .619. Sun added 11 digs to record her fourth double-double of the season.

Charli Collier, a 6-4 senior forward at Barbers Hill, announced Friday that she has withdrawn her commitment to University of Connecticut and will sign with the Longhorns this fall.

ESPN ranks Collier as the No. 1 forward prospect for the Class of 2018 and No. 2 overall player. Prospects Nation lists her as the No. 1 high school player in the country.

“I want to start off by thanking God and those that have supported me and my decisions,” Collier said via Twitter. “But I have de-committed from the University of Connecticut and committed to the University of Texas to pursue my athletic and academic career.

The post Big 12 Champions? Bowl game? Home for the holidays? All options on table for Texas appeared first on Hook ‘Em.