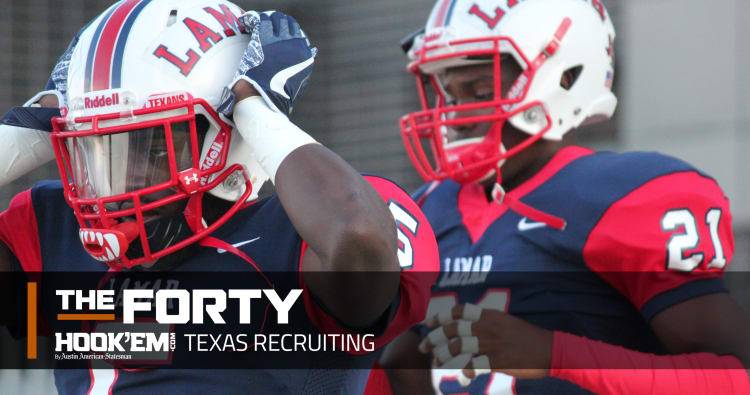 There aren’t many jewels remaining for Texas in the 2018 class. The Longhorns hold 18 commitments as October approaches and Tom Herman’s program is aiming to sign a class around 22 or 23 members, leaving about five spots left in the class barring de-commitments.

One of the top targets left is Houston Lamar cornerback Anthony Cook. The 5-star cornerback allowed just one completion against him in Lamar’s victory Friday over Alief Elsik. His performance was viewed by Herman, who flew in to watch the first half.

“Every time I play, I try to prove I’m the best cornerback in the country,” Cook said after the game. “I didn’t get a lot of passes thrown my way, but every play I picture my receiver getting the ball — that way I can’t go to sleep.”

“I’m honestly still deciding,” Cook said. “A week ago, I thought I had my mind made up. I have two more officials to go and after that I’ll be committing. I have a lot to pray about because I honestly don’t know right now.”

D’Shawn Jamison down to TCU and Texas

Cook’s cornerback teammate and fellow Fabulous 55 member D’Shawn Jamison is also nearing his decision date. The 4-star cornerback from Lamar will decide Oct. 14 and said Friday after his game that TCU and Texas are his final two schools.

“I’m trying to take it all in and watch the defenses of TCU and Texas and see how I’d fit in the system. I still have some games to go before I need to make the decision,” Jamison said Friday night. “I’m familiar with both programs and the coaches. I love both of those schools and it will be a tough decision.”

Jamison is a versatile defender. He spent time playing traditional cornerback, nickel cornerback, safety and return man for Houston Lamar in the victory. It’s a role he enjoys and wants to continue in college.

“I want chances to go make plays on defense, offense and special teams,” he said. “I don’t want to be known for one thing. I want to be known as a player who can do everything needed on the field to help the team win.”

Jamison enjoyed watching Herman fly in a helicopter to watch him play. Every bit helps in recruiting.

“It shows us that we’re important to Texas and to coach Herman,” Jamison said. “He wouldn’t be going through this to come watch us play even he didn’t want us. I think it is pretty cool.”

The Lamar trio was always towards the top of Herman’s priorities in 2018. He’s one-third of the way there with Al’vonte Woodard committed.

The 4-star wide receiver continues to encourage his teammates, Jamison and Cook, to join him at Texas.

“I work on them every day,” Woodard said Friday night with a smile. “I’m always in their ear about Texas and playing together in college. We’re all good friends so it is something we talk about.”

Woodard hosted Cook for the Texas loss against USC and feels like the defensive effort against the Trojans will help the Longhorns land his 5-star teammate.

“Cook liked what he saw against USC and how the defense played,” he said. “He went to the Maryland game so he was down on the defense after seeing it in person. That effort against USC opened up a lot of eyes. We all have to make the decisions best for us, though, so I support those guys no matter where they end up playing football.”

The post Texas in still in position to land that Houston Lamar trio of prospects appeared first on Hook ‘Em.

Big 12 Champions? Bowl game? Home for the holidays? All options on table for Texas

As Texas prepares for Iowa State, ‘there will be zero taking of this football team lightly’