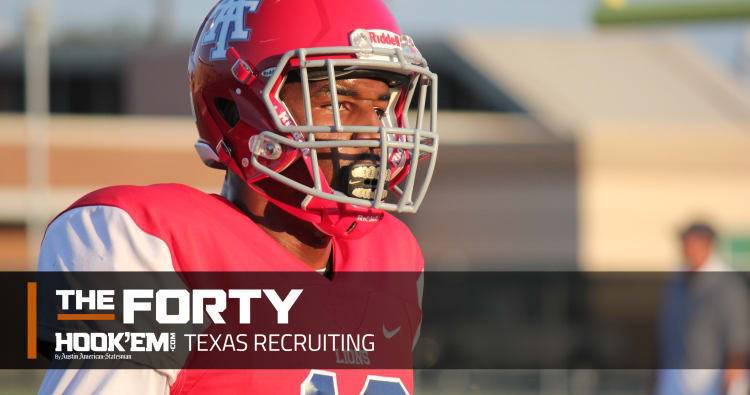 Football was the last thing on anyone’s mind after Hurricane Harvey impacted a large part of Texas. The opening games of the season took a backseat for several schools throughout the Houston area as communities focused on safety, family and rebuilding.

Football is helping the young men in those areas move past the destruction of the floods and the disruption of their senior seasons.

…it felt good being back on the field

“It is a good feeling to get back on the football field with my brothers after being gone for so long,” said 5-star cornerback Anthony Cook of Houston Lamar. “We all grow up looking forward to our senior season and then it didn’t matter when all the floods started happening around the city. We’re a little rusty because it wasn’t a normal preseason and we missed our first two games, but we’re all happy to be back playing football.”

Texas commit Al’vonte Woodard, a teammate of Cook’s at Lamar, shared a similar experience. His neighborhood didn’t experience any flooding but it became a makeshift home for a couple of his teammates. Football wasn’t the focus then. It is now.

“It is great to be back,” Woodard said. “We had to stay in the house for like a whole week and it was hurting. We were in a group chat all week talking about getting back on the field. I honestly think the hurricane brought us closer together as brothers because we went through something bigger.”

The little things add up for Brennan Eagles

The 4-star receiver from Alief Taylor does his talking on the field. Eagles spent most of his offseason dominating the camp circuit with his blend of 6-4 height and track speed. The thing he didn’t do much of this offseason, especially in the summer, was talk to the media.

Eagles and his Alief Taylor teammates won their first game of the season Saturday night against Katy Seven Lakes. He had five catches for 60 yards, but his presence also allowed his team to account for 319 yards passing and two touchdowns.

“I love the double- and triple-teams because it gives my teammates looks,” Eagles said after the win. “I’m not a selfish player. I don’t care who scores the touchdowns as long as we’re scoring touchdowns. That helps my other teammates and who doesn’t like helping other people?”

It’s obvious that Eagles can run and catch and jump with any receiver in the country. He proved that at camps this offseason and it’s why he holds more than 30 offers. Eagles hopes what sets him apart as a prospect is his willingness to do the small things to help his team win and improve as a player.

“You’re not a true receiver if you can’t block,” he said. “The thing I’ve improved most on since starting varsity football is my route-running. Elite camps help you with the route-running and learning how to get back on your route after you stack a dude. Most cornerbacks want to play press now and the camps really help with outside and inside releases.”

Eagles is ‘100 percent’ done with recruiting

A commitment doesn’t always mean a recruit is done looking at colleges. Eagles insisted Saturday night that he is not one of those recruits and that he’ll end up a Longhorn come national signing day.

“There aren’t all the distractions,” he said.