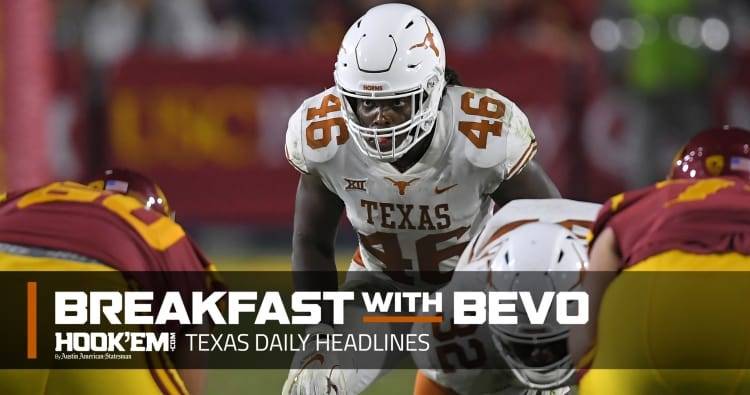 Perhaps no two Texas players shined more against USC than linebackers Makik Jefferson and Anthony Wheeler. The pair combined for 23 tackles as the Longhorns held the Trojans to 27 points, 10 below their average. Moving forward, it’s clear that defensive coordinator Todd Orlando’s system will only work if Jefferson and Hughes continue to lead.

Texas announced Monday that defensive tackle Chris Daniels has been granted his release and will transfer from the program. The 6-foot-5, 325-pound redshirt freshman was a 4-star recruit from Euless Trinity. He becomes the sixth player from the Longhorns’ 2016 recruiting class to depart since Tom Herman arrived in November.

As Texas prepares to take on Iowa State on Thursday, Herman is making sure his team knows the Cyclones shouldn’t be taken lightly. During the Big 12 weekly coaches conference call, the Longhorns coach — who was Iowa State’s offensive coordinator from 2009-11 — pointed out that many of his players were on UT’s roster the last time Texas played in Ames in 2015. That was the year Texas got shut out 24-0.

Anthony Cook still hasn’t made up his mind. The Houston Lamar cornerback is one of the top targets remaining for Texas in the 2018 recruiting class, and he’s still choosing between the Longhorns, Ohio State and LSU. Last weekend, Hookem.com recruiting writer Mike Craven caught up with Cook and his Lamar teammates D’Shawn Jamison and Al’vonte Woodard. Woodard is already committed to Texas, and he’s trying to convince the others to join him.