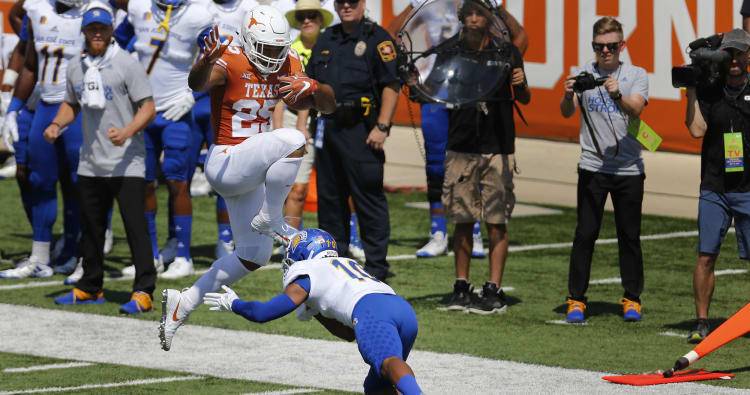 The number-crunchers at Pro Football Focus did the math on which Big 12 running backs are most “elusive,” and what they found might raise some Texas fans’ eyebrows.

The popular analytics website defines elusiveness as “a runner’s success beyond the point of being helped by his blockers.” Among Big 12 running backs with a minimum of 20 total touches, Longhorns sophomore Chris Warren III ranked second.

RELATED: Where was Texas RB Chris Warren III against USC?

The most elusive backs in the Big 12 – chasing Oklahoma’s Trey Sermon. pic.twitter.com/ZVisNWCYGt

Warren has rushed for 212 yards and two touchdowns on 26 carries this season, including a 16-carry, 166-yard performance against San Jose State in Week 2. In that game, Warren hurdled a defender and later broke several tackles on a 41-yard touchdown run.

Texas fans might argue that Warren was plenty elusive in losses to Maryland and USC too, although not in the ways this statistic measures. In those games, he combined to carry the ball a total of 10 times for 46 yards.

RELATED: The Whys of Texas: Questions galore about Chris Warren

The only Big 12 player with a higher “elusive rating” than Warren was Oklahoma freshman Trey Sermon, who ran for 148 yards and two touchdowns on 12 carries last Saturday against Baylor.

Texas will also face an elusive running back this Thursday in Iowa State sophomore David Montgomery, who landed third on the list.