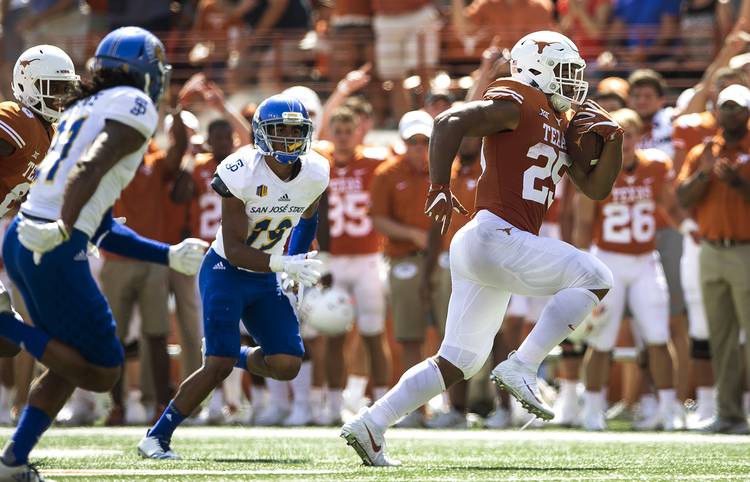 Texas running back Chris Warren III (25) runs away from San Jose State defenders for a touchdown during the first half of an NCAA college football game in Austin, Texas, on Saturday, September 9, 2017. NICK WAGNER / AMERICAN-STATESMAN

Texas had a one-man wrecking crew last year. D’Onta Foreman became a 2,000-yard rusher and won the Doak Walker Award mostly because he was force-fed the ball over and over again.

The Longhorns abandoned the run against Maryland in a three-point game going into the fourth quarter. Chris Warren III and Kyle Porter combined for only nine carries against USC.

Thursday’s game at Iowa State is a chance for Texas (1-2, 0-0 Big 12) to take another step toward Herman’s long-range goal of establishing the running game. But it’s also the first game without All-American left tackle Connor Williams, who got hurt against USC.

Will the Longhorns stick with it as the slight favorites in Ames? Or will the offensive staff put the burden on quarterback Shane Buechele’s rested-but-untested bruised throwing shoulder?

Warren has not been made available to reporters in the 10 days since the USC loss. Asked if Warren was frustrated, Beck said, “I know he is, and we’re going to continue to work to figure out the best ways to be able to use all of our players to the best of their abilities.”

Herman and his players rely on the next-man-up mentality. They are not using Williams’ injury as an excuse for lousy run blocking. The coaching staff trusts that new left tackle Tristan Nickelson and right tackle Denzel Okafor can handle a full workload.

There aren’t many guys getting breathers between them. Left guard Patrick Vahe, center Zach Shackelford and right guard Jake McMillon have played almost every snap in all three games.

“I’m excited for them, I really am,” McMillon said of Nickelson and Okafor. “I’m really proud of how they stepped up in the USC game, as you all saw. They were thrown in the fire. No one expected anything like that happen, but this is football. You have to be ready for something like that.”

Herman said he’s down to just five scholarship linemen that he trusts — the starting five that’ll go against the Cyclones. Junior walk-on Terrell Cuney is back from an ankle injury, but he’s only played in three games at Texas. Redshirt freshman J.P. Urquidez did not play last season, and freshman Derek Kerstetter was pegged to redshirt this year.

“What we’ve seen in him is a really, really tough guy that is probably a little bit more athletic than I thought when we signed him,” Herman said of the 6-6, 285-pound Kerstetter. “He’s a guy that for a true freshman he really understands football. So we need him to hurry up and develop.”

It’s as thin a unit imaginable.

The Cyclones (2-1, 0-0) have gotten off to a good start this season in stopping the run, allowing just 107 yards per game. Last season, Iowa State allowed 218.2 yards per game.

“You have to bleed them, which means we have to be more consistent than we have been,” Beck said.

Translation: Texas must run the ball effectively on early downs to set up shorter second- and third-down chances. Chances are that means UT fans will see much more of Warren and Porter as the season progresses.

“We’ve had a good string of practices put together, especially with this bye,” McMillon said. “I think the guys have gained more trust. It’s not just about practicing well. It’s about proving to your teammates that you’re ready to do it.”

The post Texas’ running game is in focus as the Longhorns go running into Ames appeared first on Hook ‘Em.