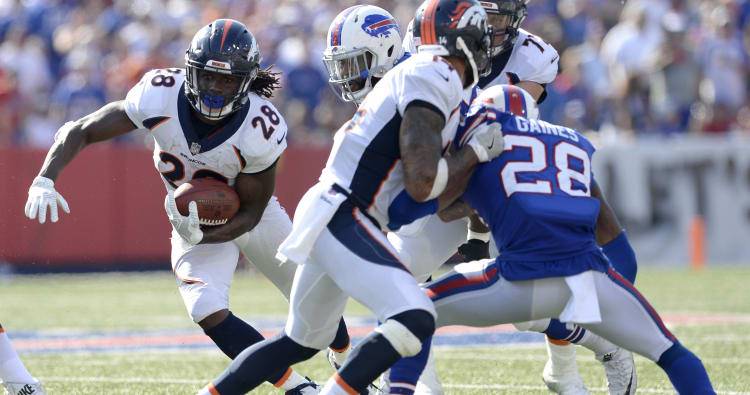 Jamaal Charles had just as many touches as C.J. Anderson in the Broncos’ 26-16 loss to the Bills. Charles rushed nine times for 56 yards and scored his first touchdown as a Bronco. He caught one pass for a yard. Charles could get more opportunities if he proves to be more effective than Anderson.

Another former running back for Texas, D’Onta Foreman, totaled 90 yards from scrimmage for the Texans. He rushed eight times for 25 yards. Foreman was effective in the passing game as well. He caught two passes for 65 yards. Foreman’s longest play went for 34 yards.

Keenan Robinson returned to the field for the first time this season after suffering from two concussions in preseason. Robinson led the Giants with 10 tackles as their rally came up just short. The Eagles needed a 61-yard field goal to avoid overtime and take the win.

Kenny Vaccaro and the Saints got their first win of the season, trouncing the Panthers 34-13. Vaccaro made five tackles and had an interception after getting benched a week earlier.

Malcom Brown, DT, Patriots—Brown had a big game as the Patriots topped the Texans 36-33. He made five tackles in the game from his defensive tackle spot.

Alex Okafor, DE, Saints—The Saints had their best defensive performance of the season, holding the Panthers to just 13 points. Okafor made five tackles and had a sack.

Derrick Johnson, LB, Chiefs—Johnson and the Chiefs remained undefeated as they defeated the Chargers 24-10. Johnson made four tackles and had a tackle for loss.

Earl Thomas, S, Seahawks—The Seahawks struggled defensively as they fell to the Titans 33-27. Thomas had three tackles and one tackle for loss.

Brian Orakpo, LB, Titans—Orakpo made two tackles and had a pass deflection. He was close to getting a sack as he hit Russell Wilson three times.

Adrian Phillips, CB, Chargers—Phillips made two tackles, but the Chargers fell to 0-3.

Sam Acho, LB, Bears—Acho made one tackle in the Bears’ 23-17 overtime win against the Steelers.

Quandre Diggs, CB, Lions—Diggs and the Lions defensive backfield are playing really well, despite falling to the Falcons in heart-breaking fashion. Diggs had one tackle and a pass breakup as the Lions picked off three passes.

Jordan Hicks, LB, Eagles—Hicks had one tackle but left the game early with an ankle injury.

Fozzy Whittaker, RB, Panthers—Whittaker had two carries for 12 yards as the Panthers were blown out.

Brian Robison, DE, Vikings—Robison got to the quarterback once but didn’t register a sack as the Vikings easily handled the Buccaneers 34-17.

Justin Tucker, K, Ravens—Tucker didn’t have much of an opportunity to contribute as the Jaguars dominated the Ravens 44-7.

Colt McCoy, QB, Redskins—McCoy wasn’t afforded an opportunity to get into the game as the Redskins defeated the Raiders in a surprise win.

Phil Dawson, K, Cardinals—Dawson was 2-for-2 on extra points, but missed a field goal. He did make one from 37 yards.

Hassan Ridgeway, DT, Colts—The defensive tackle didn’t log a stat in the 31-28 win over the Browns.

Trey Hopkins, OG, Bengals—The former Longhorn didn’t play in Sunday’s loss to the Packers as he recovers from a knee injury.