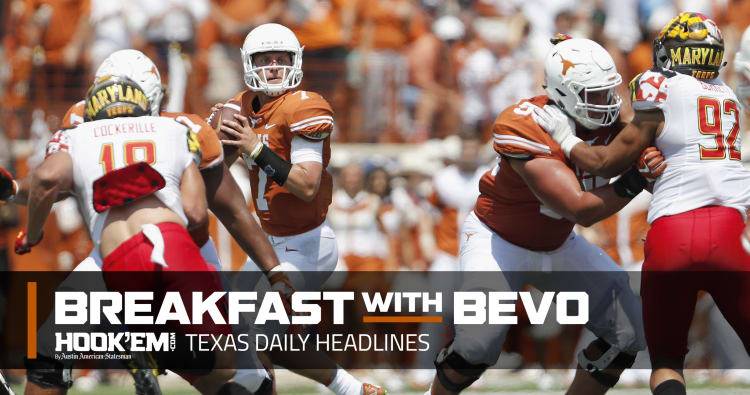 Replacing a Doak Walker Award winner isn’t easy. The Texas football team knows that. Now that they’re also missing All-American left tackle Connor Williams the task may be even tougher. Offensive coordinator Tim Beck knows Chris Warren III is frustrated and is looking to get him going as the Longhorns take on Iowa State in Ames on Thursday.

Brian Davis and Danny Davis talk TCU, Texas road trips to Ames, Iowa and Longhorns quarterbacks. Is a healthy Shane Buechele the right choice to lead this team after a gutsy performance by Sam Ehlinger against USC? Who will take the win on Thursday?

In this edition of The Forty, recruiting writer Mike Craven talks with Anthony Cook a 5-star cornerback committed to play for Texas. Cook plays for Houston Lamar alongside Al’vonte Woodard, another Texas recruit. Hurricane Harvey delayed the start of their season, so both are relieved to play football again. Craven also touches base with Brennan Eagles, a 4-star receiver from Alief Taylor, who holds more than 30 offers. Despite the many offers, Eagles said he is 100 percent committed to Texas.

Pro Football Focus analyzed Big 12 running backs with a minimum of 20 total touches and deemed Warren to be the second-most elusive runner in the league. Ahead of Warren is Trey Sermon of Oklahoma. The website defines elusiveness as “a runner’s success beyond the point of being helped by his blockers.”

Texas students to vote on restarting game vs. Texas A&M

On Wednesday, UT students will have a chance to vote in favor of renewing the Texas-Texas A&M football rivalry. The vote is an attempt to let those in charge know the students are ready for the game to come back. Student body president Alejandrina Guzman and vice president Micky Wolf are heading up the call to fellow students to vote online on Wednesday. In addition, there is a survey that students can fill out to voice their opinions to key decision makers like President Gregory L. Fenves and Athletic Director Mike Perrin.

The Longhorns shot up all major college soccer polls following a weekend that featured a win over No. 5 West Virginia. The Mountaineers had been unbeaten in 24 straight conference matches before the loss. All three Big 12 awards this week went to Longhorns. Cyera Hintzen was named offensive player of the week while Nicole Curry was named defensive player of the week. Haley Berg was honored as the freshman of the week.

Texas middle blocker Morgan Johnson was honored by the Big 12 Tuesday as the league’s defensive volleyball player of the week. She had 10 blocks in UT’s win over West Virginia last Saturday. Johnson is helping Texas lead the nation with 3.49 blocks per set. The Longhorns (9-2) are preparing to host Baylor on Wednesday.

The Texas men’s golf team finished in fourth place at the Trinity Forest Invitational in Dallas. Steven Chervony led the team in the final round as he shot a 66 to finish in a tie for 36th. Doug Ghim had the best performance overall, finishing in a tie for eighth place.