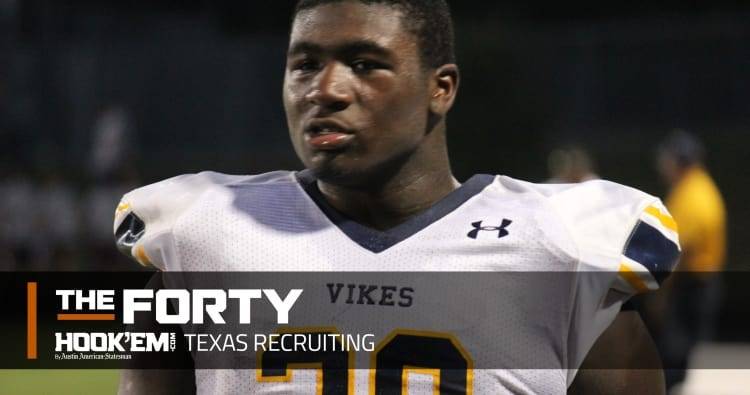 News of another defensive lineman transferring from Texas holds a silver lining for a program building toward the future instead of next week. Redshirt freshman Chris Daniels joined Jordan Elliott and Marcel Southall as defensive line transfers from the Longhorns’ 2016 class.

The loss of bodies might concern Texas fans. It probably doesn’t make the coaching staff blink an eye. Another player out of the program — one who likely didn’t fit into the future of Texas — means Tom Herman and his staff can focus another 2018 scholarship on a defensive lineman.

Keondre Coburn, a 4-star defensive tackle from Spring Westfield, is Texas’ lone defensive line commit in for 2018. It’s the only true weak position in an otherwise rock-steady recruiting class that ranks second in the country and first in the Big 12.

Brown is a favorite of UT defensive line coach Oscar Giles. Brown, who attends the same school that produced quarterback Shane Buechele, is a physical specimen who can play defensive tackle or defensive end in an odd-man front system like the one utilized by Texas defensive coordinator Todd Orlando. Alabama is the team to beat, but Brown did say after a game earlier in the season that he’ll take an official visit to Texas.

Wright is the best defensive end in the state. He’s also committed to Texas A&M, which is a real roadblock for Herman’s staff. The Longhorns aren’t done fighting for his signature, however. Herman himself took a helicopter to Katy Taylor to view Wright’s game last Friday and the staff is in constant contact. Wright is an ideal fit for the position currently held by Malcolm Roach, but he likes the idea of playing defensive end on a four-man line.

Ossai is a late bloomer on the football field after picking up the sport late. He’s developed into a dynamic athlete with incredible upside as a pass rusher. Ossai is long, lean and quick off the ball, traits that every defensive coach wants in an end. Ossai also is athletic enough to play linebacker or blitz without his hand on the ground. Texas A&M was the clear leader early, but the longer he remains uncommitted, the better Texas should feel about its chances.

Perkins took an official visit to Texas for the San Jose State game and left impressed. He’s still favored toward Oklahoma after the visit. Perkins qualified for The Opening over the summer and will participate in the U.S. Army All-American Bowl in San Antonio after the conclusion of his senior season. Texas needs playmakers at defensive end and Perkins is one of the top available prospects in the country.

Carson doesn’t come with the high-profile recruiting attention as the other four players on this list. He’s a 3-star defensive end ranked outside the top 500 as a national prospect, per the 247Sports composite. That isn’t to knock Carson or the fact that Texas is recruiting him. It speaks to the fact that Texas feels he’s a great fit for the program schematically and that Carson should probably be moved up the rankings.

Texas is yet to gain a foothold at the premier college football factories in the D-FW area over the past few seasons. The 2018 class is no different, though that is more of a result of the amount of talent disparity in Houston in this specific class. Dallas will once again be an important recruiting ground in 2019 and Bishop Dunne is home to two key recruits.

Brian Williams, a 5-star safety and the No. 1 player on The Next 25, recently included Texas in his top six. Marquez Beason, a 4-star athlete who can play wide receiver, running back or defense, also holds a UT offer and is a 2019 product.

Herman is known for recruiting Houston and he’s done a great job in 2018 of gaining commitments from players across the state and the country. There is no doubt anymore whether the staff can recruit outside of Houston. The next step is to become a landing spot for players at schools like Bishop Dunne, Allen and DeSoto, among others, as much as it is for the elite players in Houston.

Texas vs. Iowa State: A Q&A with a Cyclones beat writer