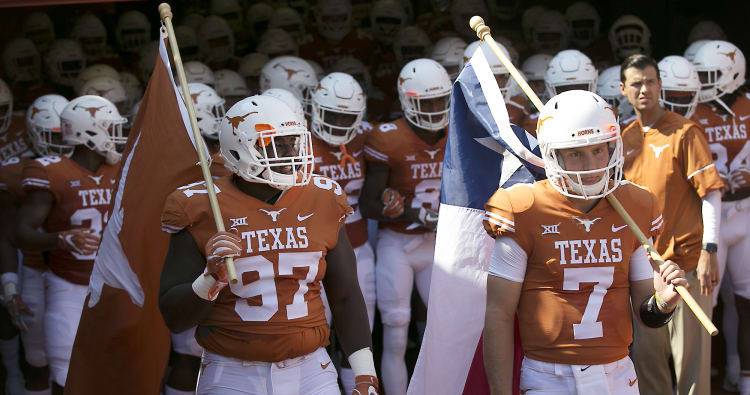 1. Is Shane Buechele returning — or auditioning for the job?

Buechele, who has missed the last two games with a bruised shoulder, is expected to be back in the Texas huddle. Fans haven’t seen him since the opener, when he threw for 375 yards and two touchdowns — with some of that coming in junk time — in the loss to Maryland. Freshman Sam Ehlinger has made some errors in Buechele’s place but also has had some big moments and performed admirably against San Jose State and USC. Are we seeing the start of another quarterback controversy brewing at Texas, or can Buechele hold off Ehlinger with a solid performance?

2. How many carries will Chris Warren III get?

Or Kyle Porter, for that matter. In Texas’ two losses, the quarterback has had more rushing attempts than the top two running backs — combined. Buechele had 15 runs compared to Warren and Porter’s 14 against Maryland and Ehlinger’s 19 carries more than doubled the nine handoffs given to them. What about the 56-0 win over San Jose State? Warren had 16 carries for 166 yards and two touchdowns, Porter had 16 carries for 72 yards and a score.

3. Will the Texas defense continue to show progress?

Todd Orlando’s debut as defensive coordinator was the 51-point letdown against Maryland. The Longhorns defense, though, followed that up with a shutout at home and a respectable road effort at USC, holding the Trojans — who are averaging 37 points a game — to 27 points through two overtimes. Texas is allowing 26.0 points per game, which would have ranked 49th nationally last year but is tied for 71st through four weeks this year. (Texas last had a top-50 defense in 2014.) Iowa State is tied for 16th nationally in scoring, averaging 41 points a game.

Throw out the bowl games and season openers and the Longhorns are 6-4 when they have 10 or more days of rest over the past five years. Only time will tell, though, whether the off week was a good thing or a bad thing this season. Texas has had a lot of time to think about that double-overtime loss to USC. After that game, left guard Patrick Vahe was asked if the Longhorns needed a break or a quick shot at redemption. “The schedule is the schedule,” he answered. “I wouldn’t play it any other way.”