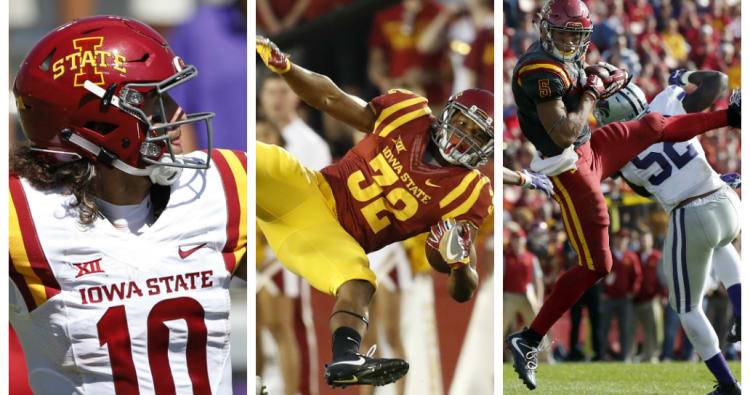 We’re interviewing the beat writer of Texas’ opponent each week this season. This week, it’s Tommy Birch (@TommyBirch) of the Des Moines Register offering his insight on the Iowa State Cyclones.

1. Iowa State is already one victory away from matching last year’s win total. Does this team have a shot at its first bowl game since 2012?

There’s certainly a ton of hope. Matt Campbell, who is in his second season at Iowa State, has re-energized the fan base and given it hope for a bowl game with several strong recruiting classes. The Cyclones have already made massive strides but if Iowa State doesn’t get to a bowl this season, they’ll at least tease one. While fans want to get back to a bowl game, being in contention for one at the end of the season may be just as satisfying with how the last few seasons have gone.

2. How has the offense looked with Jacob Park running the show on a full-time basis?

The offense is on pace for one of the best in school history and it’s because of Park and a deep and talented wide receiver corps. Park might have the best arm of any Iowa State quarterback in over a decade and now that he has a season under his belt from last year, he looks better than ever. He’s averaging 311.7 yards and 25.3 completions per game.

3. How is linebacker Joel Lanning doing since his move from quarterback?

Through three games he’s had mixed results, but for the most part he’s exceeded a lot of expectations. Lanning hadn’t played defense since eighth grade but quickly caught on and has shown plenty of potential. He graded out well in the first game, struggled in the second but had his best showing in the third game when he tallied his first sack and grabbed his first interception. There will be bumps in the road, but Lanning will get better as he gets more experience.

4. Iowa State’s defense has so far fared well against the run (107 YPG). Is that a credit to the Cyclones or a reflection on who they’ve played?

A little bit both. The defense line was the biggest question mark going into the season but has done well. Some of the toughest tests for the unit still await them, but they have come a long ways and could get better thanks to some newcomers. Ray Lima, a junior college transfer, has been a force at nose guard. So has defensive tackle Vernell Trent. And another junior college star, Kamilo Tongamoa, is still getting his feet wet after arriving on campus shortly before the season started.

5. Name one Iowa State player that Texas fans aren’t talking about — but should be.

Wide receiver Hakeem Butler is probably still flying under the radar. Butler is in a room full of talented wide receivers like Allen Lazard, Trever Ryen and Deshaunte Jones. But Butler may be among the most talented and Campbell even said that before the season started. The 6-foot-6, 219-pound redshirt sophomore has already caught 15 passes for 234 yards and four touchdowns. He’s also got a crazy back story: Butler overcame poverty, the loss of his mother to breast cancer and a move to Texas to live with his cousins — the Harrison brothers, who were stars at Kentucky.

6. For those Texas fans making the trip to Ames, do you have any restaurant recommendations?

You can’t go to Ames without visiting Hickory Park at least once. I hate barbecue with all my heart and soul but even that place, which specializes in it, has grabbed my love. Bonus answer: If you happen to be staying in Des Moines, swing by GoodSons, a bar and panini restaurant in a small suburb called Beaverdale. Name-drop me, save some money off my next tab and play some Hanson on the jukebox.

The post Texas vs. Iowa State: A Q&A with a Cyclones beat writer appeared first on Hook ‘Em.