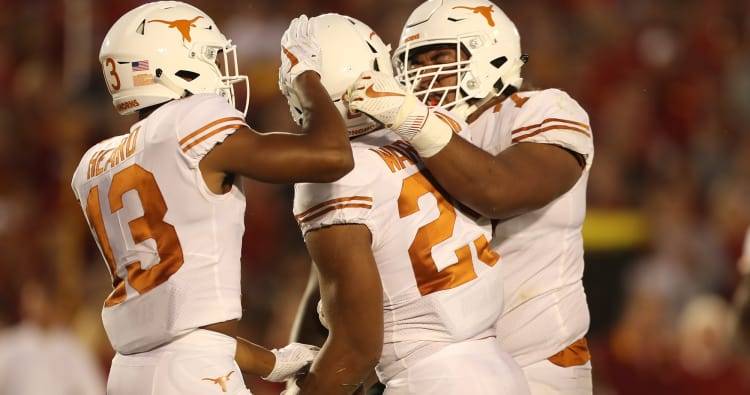 Sam Ehlinger has not played yet.

Elliott was shaken up late in the second quarter.

Texas used both Chris Warren III and Kyle Porter on its opening drive. The Longhorns drove 81 yards and Warren’s 11-yard touchdown run gave Texas the quick early lead. But it was hardly that easy: The Longhorns survived two drive killers — on the very same play. On third-and-9 at Texas’ 20, Buechele fumbled in the backfield but Zach Shackelford jumped on it at UT’s 17. That should have led to a punt deep in their own territory, but Iowa State’s JaQuan Bailey was flagged 15 yards for an unsportsmanlike conduct penalty, giving Texas new life at its own 32.

Byron Jones went down on Iowa State’s second drive, an injury that at least looked serious enough for Tom Herman onto the field to check on him. Jones, though, was merely shaken up after getting blocked by Allen Lazard; he was replaced by John Bonney. He suffered some sort of rib injury.

Jones returned to the game on the Cyclones’ next drive. On the drive after that, he was flagged for defensive holding, which gave the Cyclones a first down at their own 44.

Buechele was nearly picked off near the end of the first quarter. But disaster struck near midfield when Warren, running to his left, pitched the ball to Foreman, who was spinning around to the opposite direction. The ball ended up on the ground and the Cyclones recovered. Was it a designed play or an improvisation? We won’t know till later. Either way, Iowa State took over at Texas’ 46.

Toneil Carter appeared in the second quarter. He had a couple of carries and caught a short pass.

DeShon Elliott’s third pick of the season set Texas up at its own 40. Buechele took a shot to the head on a first-down run as he was sliding down; the Cyclones were flagged 15 yards for a late hit down to the Iowa State 33. Buechele carried four times on the drive but it was his 22-yard touch pass over the middle to Carter that put the Longhorns up 14-0.

Iowa State tried to put together a drive late in the half, but it stalled in Texas territory. Rather than go for a 54-yard field goal try with 1:50 left, the Cyclones punted. Foreman, standing inside his 10, let the ball bounce at the five with two Cyclones near it. It was downed at the 2.

Porter was stopped for no gain, then moved it to the 4 on a 2-yard gain. On third-and-8 from the 4, Porter got 3 yards and Iowa State called its final time out with 46 seconds left.

Dickson’s 56-yard punt moved the Cyclones back to their own 39. But Kris Boyd picked off an overthrown pass from Park and returned it 26 yards to Iowa State’s 40.

Texas, though, had only 13 seconds to work with and the first half ended.

The post It’s halftime, and Texas is pitching a 14-0 shutout in Ames appeared first on Hook ‘Em.