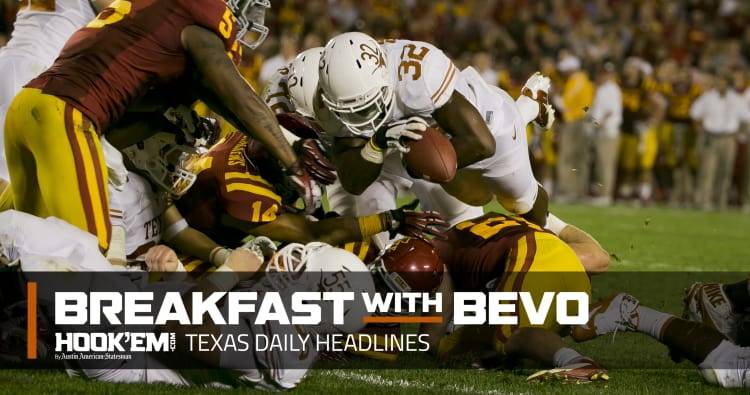 Thursday contest a trap game for the Longhorns?

After a weekend off, the Texas football team is set to open Big 12 action in Ames, Iowa, facing the Iowa State Cyclones. Losing in shutout fashion was bad on its last trip to Ames in 2015. But a kid cussing you out? Even worse. Malik Jefferson recalls a moment that hurt his heart as he walked off the field after falling to Iowa St. 24-0 that year. The Cyclones started giving the Longhorns fits in 2010 when they upset Texas at home 28-21 with Tom Herman as Iowa State’s offensive coordinator. Will the Longhorns play to the level of their competition this year?

Cedric Golden: Self-starting hasn’t been a strength for this group

In his column, Cedric Golden lays out the reasons Longhorn Nation should be concerned. The lack of buzz or hype around this game along with a great effort against the USC Trojans 12 days ago makes for a trap game. Long gone are the days when Texas could roll into Ames knowing a win was a virtual guarantee. Looking at the upcoming schedule, Golden asserts the Longhorns can’t afford a slip up to Iowa State.

In this edition of columnist Kirk Bohls’ nine things and one crazy prediction, Bohls talks about what to expect  Thursday night between Iowa State and Texas. He also touches on how the Longhorns will have to step up on the offensive line after losing All-American tackle Connor Williams. Any more injuries across on the offensive line could spell disaster. Elsewhere in the Big 12, Bohls commended the Baylor effort against Oklahoma last weekend.

Texas beat writer Danny Davis looks at five matchups heading into the Texas vs. Iowa State game and asks four questions facing the Horns. One matchup to watch pits two former quarterbacks against one another. Another battle to watch is Collin Johnson vs. Iowa State’s defensive backfield to see if the wide receiver can come close to duplicating his breakout performance against USC. Is Shane Buechele returning or auditioning? How many carries will Chris Warren III have? After 12 days off will Texas be rusty or rejuvenated? Davis offers up key facts and statistics.

Iowa State beat writer Tommy Birch (@TommyBirch) of the Des Moines Register offers his insight on the Iowa State Cyclones. He talks about the team’s bowl chances, the productive offense and Joel Lanning’s switch to linebacker, among other topics.

Loss of defensive lineman opens a spot for 2018 class

Though Texas lost another defensive lineman when Chris Daniels decided to transfer, that allowed Tom Herman and his staff to use a 2018 scholarship on the defensive front. Recruiting writer Mike Craven lists five potential targets for the UT coaching staff to add and join Keondre Coburn, a 4-star defensive tackle from Spring Westfield.

The Longhorns basketball team will host an event for fans to take a look at the 2017-18 team at Gregory Gym on Oct. 18 at 7 p.m. It’s the third year in a row for the Texas Tip-Off scrimmage.

Texas freshmen Lexi Sun and Ashley Shook teamed up to help Texas sweep Baylor at Gregory Gym Wednesday night. The dynamic duo has bonded in just a few months at Texas and that chemistry shows on the court.

Longhorns in the NFL: Week 3 features RBs and stout defense

Jamaal Charles scored his first touchdown as a Bronco and D’Onta Foreman gained 90 yards from scrimmage to highlight the week for the Longhorns playing football in the NFL. Week 3 was also marked by solid defensive efforts and a return to the field for one injured Horn.

The post Longhorns set to open Big 12 play in Ames, site of infamous non-fumble and shutout by the Cyclones appeared first on Hook ‘Em.

Texas’ notable number: Pass-catchers at Texas — and the number 13