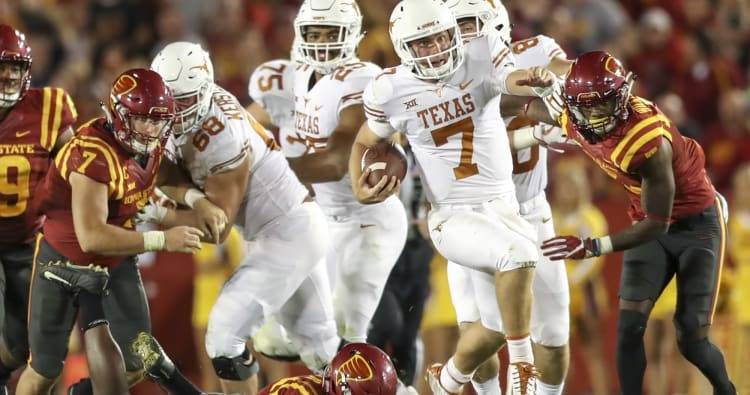 On Thursday morning, we looked at four questions that Texas was facing ahead of its matchup with Iowa State.

Here is how they played out:

1. Was Shane Buechele returning to — or auditioning for the job?

Probably was returning to it. But should be auditioning for it.

Buechele, making his first start since the season-opening loss to Maryland, was serviceable. He completed 19 of 26 passes for 171 yards and a touchdown. He was picked off once and fumbled it on third down, though the Longhorns recovered. But the offense struggled to sustain drives all night — both scoring drives were aided by key Cyclones penalties — and the Longhorns just didn’t click. We can give Buechele a one-week pass since it was his first game back. But things are about to get serious on the schedule. Sam Ehlinger, who started the previous two games against San Jose State and USC, didn’t play.

2. How many carries did Chris Warren III get?

That’s a big jump from his USC effort and it matched the number of totes he had against San Jose State, when he finished with 166 yards and two touchdowns. He never got into a groove in Ames, though. He finished with 16 carries for 44 yards and a touchdown, averaging 2.8 yards per carry — one whole yard less than the 3.8 yards he averaged against USC, which Tom Herman referenced last week when pressed about the running game. And Kyle Porter was equally flat: 17 carries for 39 yards, an average of only 2.3 yards. Freshman Toneil Carter got a lot of snaps.

3. Did the defense continue to show progress?

The game-long intensity that Texas displayed in the double-overtime loss at USC wasn’t quite there in Ames, but the Longhorns nevertheless had a solid defensive showing. Texas held Iowa State to 256 yards, including only 10 rushing yards. The Cyclones were only 3 of 12 on third-down conversions and failed twice on fourth downs. Texas sacked Jacob Park four times and the Longhorns forced three turnovers, all interceptions. The offense struggled but the defense turned in a third straight big game.

4. After the break, did the Horns look rusty or rejuvenated?

Offensively, anyway. Maybe it was the move at quarterback. Or not having Connor Williams up front. But Texas never quite looked interested in putting together a string of plays. The running game, a focus during the off week, continues to be a worry; the Longhorns averaged only 2.7 yards per carry and the longest run came from a quarterback, not a running back. Perhaps it wasn’t that big of a surprise; over the past five years, excluding bowl games and season openers, Texas was 6-4 in games after having at least 10 days of rest. Make that 7-4 now.