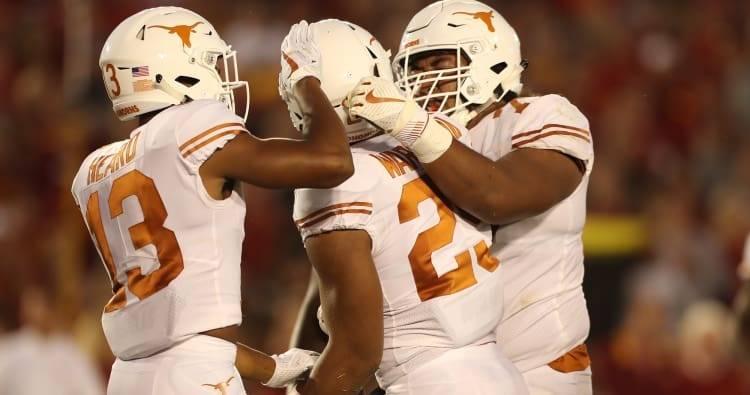 A statistical and scoring breakdown of Texas’ win over Iowa State:

Texas 7, Iowa State 0. Chris Warren III had five carries on the opening touchdown drive, which already exceeded his workload in the USC game. The Longhorns also recovered their own fumble on the drive and were bailed out of a third-down sack thanks to an unsportsmanlike conduct penalty on Cyclones defender JaQuan Bailey, who got the sack but then did a cartwheel on the field. Texas was generous, too — Warren tried an unsuccessful pitch to Foreman on a reverse and gifted the ball back to Iowa State. The Cyclones were held to 33 yards in the quarter.

Halftime — Texas 14, Iowa State 0. The Longhorns picked off Cyclones quarterback Jacob Park twice in the quarter; UT capitalized on the first one. After DeShon Elliott’s pick, Texas drove 60 yards in five plays and Toneil Carter logged the first touchdown catch of his career (the freshman had a 4-yard scoring run vs. San Jose State). The second interception came in the final minute of the half; the Longhorns ran out of time. Park completed half of his 26 first-half attempts.

Texas 14, Iowa State 7. Things went off the rails a bit for the Longhorns. The second drive of the half was a mistake-riddled series that featured three holding penalties (one was declined) and Buechele’s second interception of the season. Michael Dickson, who had punts of 61, 60 and 56 yards in the first half, had a 17-yard shank that set the Cyclones up at UT’s 28; it led to a touchdown pass. Replays then overturned an Armanti Foreman fumble on a kickoff return and a defensive fumble return for the Cyclones touchdown. DeShon Elliott recorded his second pick of the game and fifth of the season.

Final — Texas 17, Iowa State 7. The Cyclones twice went for it on fourth down, once from the 50 (fourth-and-4) and once from UT’s 36 (fourth-and-4). They came up short both times. Joshua Rowland nailed a 49-yard field goal — his longest yet as a Longhorn, further distancing himself from a horrific start to the season. On a third-and-11, Buechele kept it for a 13-yard run and a first down with 6 minutes left. The Longhorns ran out the clock.

Texas 17, Iowa State 7: Sluggish but defensive-minded Horns will take a win in Ames