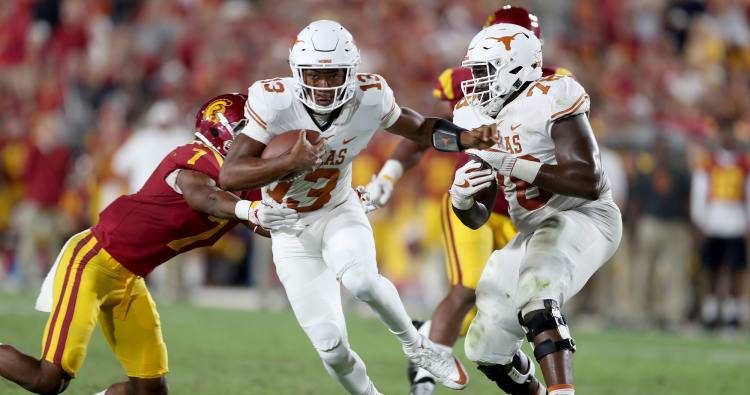 When Texas and Iowa State take the field Thursday night in Ames, it will be the first time the Longhorns have played a weekday game in September since Sept. 8, 1988. If it feels strange for Texas to be playing on a weekday, there’s a good reason.

Thursday evening will mark only the seventh time the Longhorns have played on a non-holiday weekday in the past 50-plus years. Find game time, TV channel and information about how to watch online below.

RELATED: As Texas prepares for Iowa State, ‘there will be zero taking of this football team lightly’

Weather: The forecast calls for a high temperature of 75 degrees on Thursday in Ames, with an overnight low of 49. Sunset is at 7 p.m., and mostly clear skies and light winds are expected.

The line: Texas is a 6.5-point favorite to beat Iowa State.

Which TV channel is Texas-Iowa State on?

The Texas-Iowa State game in Week 5 is on ESPN. Steve Levy (play-by-play), Brian Griese, Todd McShay (analysts) and Laura Rutledge (sideline) will be the announcers.

How can I watch Texas-Iowa State online?

The game between Texas and Iowa State can be viewed online via WatchESPN.com and the WatchESPN app.

How can I listen to the Texas-Iowa State game on the radio?

The Texas-Iowa State game in Week 5 will air live on the Longhorn IMG Radio Network. In Austin, the local radio affiliate is 104.9 The Horn. A full list of Longhorns radio affiliates can be found here, or you can click the play button below to listen online.

In the Longhorns’ two losses, starting running back Chris Warren III has carried the ball a total of 10 times for 46 yards. Against USC, Warren only touched the ball 5 times — with one of those being an 11-yard reception. All-American left tackle Connor Williams is out indefinitely, but Texas still needs to find a way to run the ball effectively.

The Longhorns stifled a potent USC offense in their last outing, but the question remains as to whether they can do it again in back-to-back games. Remember, this is the same defense that yielded 44 of Maryland’s 51 points in Week 1. Against the Trojans, they allowed just 71 rushing yards and intercepted Heisman Trophy contender Sam Darnold twice. Linebackers Malik Jefferson and Anthony Wheeler may hold the key to keeping defensive coordinator Todd Orlando’s unit humming.

Texas coach Tom Herman has repeatedly said that his team won’t be taking Iowa State lightly, but any ultra superstitious Longhorns fans might want to stop reading now. Jack Trice Stadium holds plenty of haunts from the recent past, with a 31-30 escape in 2013 and the 24-0 disaster two years later.

And remember that stat from the top about weekday games? That 1988 game was against BYU in Provo, and the Cougars stuck it to Texas 47-6. It probably means nothing. No, it definitely means nothing. But, if weird things start happening …

Longhorns set to open Big 12 play in Ames, site of infamous non-fumble and shutout by the Cyclones