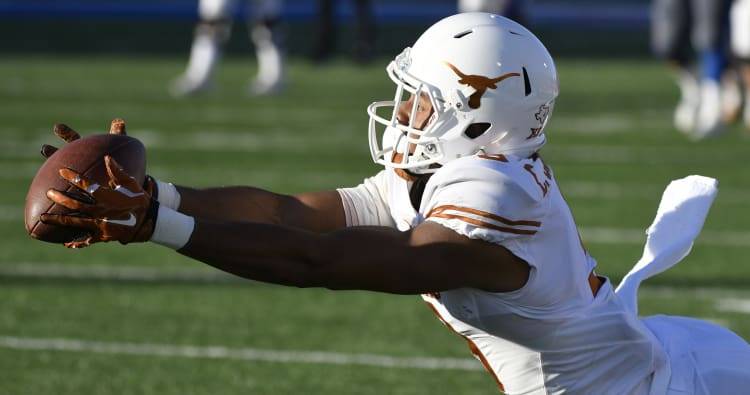 This week’s notable number is 13.

Thirteen is a number worn by versatile Jerrod Heard and punter Michael Dickson. On Thursday, Texas vies for its 13th win in 15 meetings against Iowa State. The Longhorns have had a quarterback complete 13 straight passes nine different times, with Colt McCoy responsible for five of those.

Thirteen also accounts for the number of receptions separating receivers Collin Johnson and Lorenzo Joe, who rank first and eighth respectively on the team.

Let’s do some math. Texas is one-fourth of the way through its regular season, so Johnson’s (16) and Joe’s (3) catches prorate out to 64 and 12 receptions on the season. That would be a difference of 52 catches.

Last year, Texas’ first- and eighth-most productive receivers were separated by only 16 catches. Armanti Foreman led the team with 34 receptions while John Burt finished with 18.

Texas retained six of its top eight pass-catchers from last season. The depth in the receiving room was consistently touted as a strength ahead of Tom Herman’s first season in Austin.

Through three games, though, only Johnson (16), Foreman (15) and Reggie Hemphill-Mapps (12) have double-digit catches. Explosive veterans like Burt and Devin Duvernay have each been limited to only one catch so far. Heard also has one reception, but he also has focused on being a backup and situational quarterback the past two games.

Herman said last week that “we’ve got to find more ways to get those guys on the field.” The following day, offensive coordinator Tim Beck pointed to Joe and Lil’Jordan Humphrey’s efforts against USC while noting that some receivers were doing the little things that didn’t show up on the stat sheet.

“It’s not that they’re not executing what we’re asking them to do; I think they are,” Beck said. “It’s just that those other guys are maybe getting more balls at this time thrown at them.”

Campbell lauded the Longhorns’ size, which he assessed was similar to an Iowa State roster led by 6-5 receiver Allen Lazard and 6-6 receiver Hakeem Butler. Six of UT’s receivers are at least 6-3 and none of the five scholarship tight ends are shorter than 6-4.

“I really am impressed with them at the catch point,” Campbell said. “They become a mismatch at times because of their size and their length.”

Johnson is coming off the fourth-best receiving game in school history as he recorded 191 receiving yards against USC. The sophomore has corralled 31 of his 44 career catches in his last seven games. He’s averaging 17.2 yards per catch during that span.

“Football is a sport where so much is out of your control, you can’t just judge a player off their stats any particular Saturday,” Johnson said. “We have great players and just because you’re fortunate enough to have a huge game or just have one catch, you just have to do whatever your role is in that game whether it’s blocking your hardest, running a route to get someone else open or being the fortunate guy to catch the ball or scoring a touchdown.

The post Texas’ notable number: Pass-catchers at Texas — and the number 13 appeared first on Hook ‘Em.

Longhorns set to open Big 12 play in Ames, site of infamous non-fumble and shutout by the Cyclones

The Eyes of Texas: 3 Cyclones the Horns will be watching