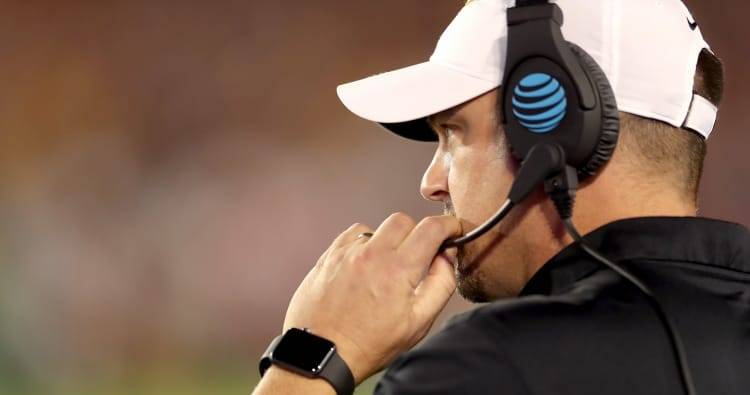 Texas grabbed its second win under first-year coach Tom Herman, shutting down the Iowa State offense on the way to a 17-7 victory Thursday night in Ames, Iowa.

Afterward, Herman spoke briefly on SportsCenter and addressed the media in his postgame press conference. Here is some of what was said.

It wasn’t pretty, especially on offense for the Longhorns who managed 312 total yards and only scored a field goal after halftime. Still, Herman seemed proud of the effort he witnessed from his team and complimented them on earning their first road win of the season.

“We’re gonna celebrate this win,” he said. “Winning college football games is really hard, and winning games on the road on Thursday night is even harder.”

For the second game in a row, Texas held down a team that came in averaging more than 40 points a game. In addition to only scoring one touchdown, the Cyclones only had 256 yards of total offense — including just 10 yards on the ground.

“We played great defense,” Herman said. “We got fourth down stops and made them one dimensional.”

“When we’re blitzing and we’re in our third-down package we’re making it really difficult for quarterbacks back there,” Herman said.

“We’ve got to find a way to run the ball”

As well as it stopped the run, Texas also couldn’t find much traction on the ground offensively. Running back Chris Warren III led the Longhorns with 44 yards and a touchdown on 16 carries.

All total, the Longhorns had 141 rushing yards on 52 attempts.

Tom Herman was complimentary of Iowa State when asked about Texas’ offense throughout the night. pic.twitter.com/dA5qgtHz48