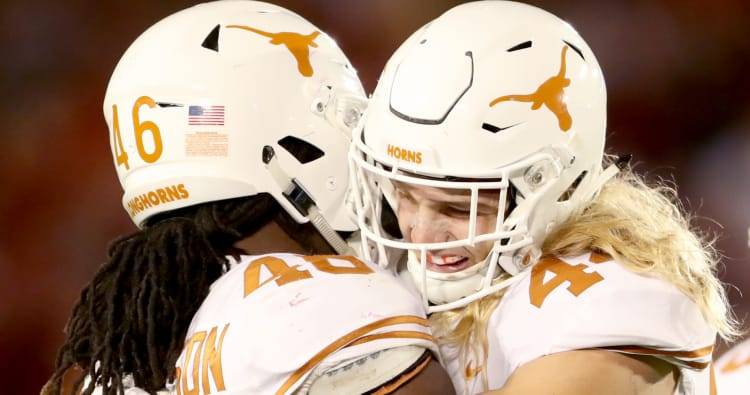 AMES, Iowa — There were 142 snaps taken in Texas’ 17-7 win over Iowa State on Thursday. Here are five that ended up making a big difference:

Texas deferred after winning the coin toss, but the Longhorns still quickly addressed the critics from their last game. After an Iowa State three-and-out, the Longhorns pieced together a 12-play scoring drive that was capped by Chris Warren III’s 11-yard touchdown run.

Texas ran the football nine times on that first possession. Warren received five of those handoffs. That came 12 days after he recorded only four carries in a 27-24 double-overtime loss to USC. (Backfield comrade Kyle Porter ran five times against the Trojans).

Warren ended up running 16 times on Thursday night, and he picked up 44 yards. Porter earned 39 yards over 17 attempts.

2. No times for tricks

Texas had an early chance to deliver a knockout punch, but the Longhorns squandered an opportunity on their second possession. Leading 7-0, UT went from its 20 to the Cyclones 46 in seven plays. On a first-down snap, Texas then handed the ball off to Warren.

Offensive coordinator Tim Beck called for a reverse. Iowa State’s defense, however, quickly collapsed as Warren ran to his left. Warren attempted to still make something out of nothing, but his pitch never connected with receiver Armanti Foreman. Iowa State jumped on the loose ball. On its opening drive, Texas recovered a fumble by quarterback Shane Buechele. The Longhorns were not as lucky the second time.

What in the world? Warren is rolling, but then Texas tries this and Iowa State takes over on a fumble. pic.twitter.com/VQk60kyzNb

3. Turning a pick into six

In that 27-24 loss to USC, Texas got two interceptions from junior safety DeShon Elliott. For his efforts, Elliott was named the Big 12’s defensive player of the week and he’ll certainly be under consideration for that award again. Elliott intercepted two more passes against Iowa State and broke up a touchdown pass with a booming hit in the end zone.

On his first interception, Elliott essentially fair-caught an overthrown pass from an under-pressure Jacob Park. The play set Texas up at its 40 with 7:35 left in the second quarter. Five plays later, true freshman Toneil Carter recorded the first touchdown catch of his career.

DeShon Elliott in the right place at the right time. His third INT this year. #Hookem pic.twitter.com/iJ4qWdfwtp

Kris Boyd also had an interception. The Longhorns have seven picks through their first four games. Texas has turned those seven picks into 31 points — including three pick-sixes from Holton Hill and Elliott; Elliott’s second interception on Thursday night set up Joshua Rowland’s 49-yard field goal (See No. 4).

The Longhorns did not have a defensive touchdown last year. Their 10 interceptions only led to 24 points.

Iowa State pulled within seven points on an 11-yard touchdown pass in the third quarter. Texas, however, re-established its lead with 13:25 remaining in the game on Rowland’s 49-yard field goal.

Rowland had missed his first three attempts of the season, all of which were from beyond 40 yards. Texas coach Tom Herman, though, said he continued to have trust in Rowland’s leg due to the junior college transfer’s work in practice.

Rowland was a yard shy of kicking the 61st 50-yard field goal in Texas history. Only 20 of those 60 50-yard kicks were made in true road games.

While attempting to mount a comeback, Iowa State tried to extend its two fourth-quarter drives with fourth-down conversions. The Cyclones were unsuccessful both times.

On the second attempt, Iowa State receiver Hakeem Butler was stopped two yards short by P.J. Locke III on a 4th-and-4 at the Texas 36. The exclamation mark, though, was Malik Jefferson’s throw-down sack of Park on a 4th-and-4 at midfield on the preceding possession.

Malik Jefferson closes in for the 4th down sack. #Hookem pic.twitter.com/oUCy2zqCF4

Texas has now thwarted all seven of the fourth-down attempts it has faced this year. Of the 11 FBS-level teams that haven’t allowed a fourth-down conversion, no defense has been tested more than UT’s.

Of 11 FBS teams that haven’t allowed a 4th-down conversion, Texas has faced the most attempts (7). Iowa State was 0-for-2 yesterday. #HookEm pic.twitter.com/JFvVOvk2De