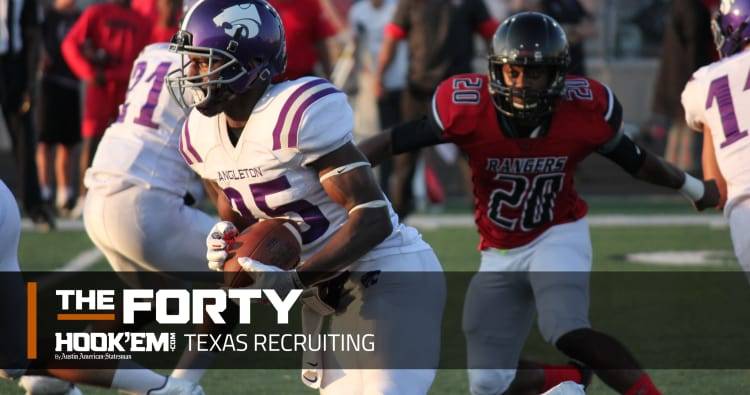 The safety position wasn’t exactly a strength for the Texas defense during Charlie Strong’s tenure. The  unit lacked consistency, leadership and playmaking ability. Texas defensive coordinator Todd Orlando set out to change that perception and it is starting to work.

After a poor performance against Maryland, the safety duo of DeShon Elliott and Brandon Jones is quickly becoming formidable. Both were high-level recruits and Orlando’s scheme is starting to highlight the potential of both players, especially Elliott, who leads the team with four interceptions. Jones is fourth on the team in tackles.

“The safety group at Texas is getting better with every game and that’s what you want to see,” said 4-star safety commit Caden Sterns after his high school game Friday. “Texas allows its safeties to go make plays on the football and that makes me want to play in the same scheme.”

Texas holds commitments from three of the top safeties in the country. Sterns, B.J. Foster and DeMarvion Overshown are all Fabulous 55 members. Foster is a 5-star talent, while Sterns and Overshown remain 4-star prospects.

“I try to watch both safeties when I’m looking at the Texas defense because I think I could play either position,” Foster said on Saturday after his team’s win. “Those guys are playing great right now. It’s a good sign for the future.”

B.J. Foster happy to be back on the field

There’s no denying the talent of Angleton athlete B.J. Foster. He’s a 5-star prospect for a reason despite missing the last half of his junior season and some time as a sophomore to various injuries. Foster is a two-time The Opening Finalist and the top safety prospect in the country, per the 247Sports composite. It’s been a long offseason, and he’s happy to have football back in his life.

“It feels great to be back with my teammates,” Foster said. “Those guys are a part of my family and I missed being on the field with them at the end of last year. My house wasn’t messed up with the hurricane, but it was a hard time for all of us to just wait for the season to start. The first day of practice after the hurricane, we were pumped up and ready to take care of business.”

Foster and his Angleton  teammates beat Rosenberg Terry 49-7 on Saturday. Foster, who will play safety in college, didn’t play a snap of defense in the game. He’s Angleton’s featured running back and is only used on defense when needed.

“As long as the defense keeps holding teams to under 10 points, I’m OK playing just offense,” he said. “I want to be on the field for every snap, but it comes down to what is best for the team and where I can help the most.”

Foster plans on signing with Texas in December. His focus is solely on his senior season.

“I feel good not having to worry about recruiting like I had to in the past. My only focus is to win football games and get ready for the next level,” Foster said. “The new early signing period gives us a chance to get it out of the way in December.”

A familiar name with a peculiar week

Marshall prospect Chasen Hines is not a new name on the recruiting front for Longhorns fans. The 6-2, 350-pound 4-star lineman received an offer from Texas early in the process to play offensive guard. He chose LSU over the Longhorns in the spring.

Now, months later, the Longhorns are back in the race for Hines, but not as an offensive lineman. Texas re-offered Hines this past week as a defensive tackle. Hines plays offensive and defensive line for Marshall, so it wouldn’t be a complete position change for Hines.

LSU, though, fired back by offering Hines a chance to play defensive tackle and Hines reaffirmed his commitment to the Tigers on Sunday night.

Keondre Coburn is the only defensive tackle committed to Texas in the 2018 class. With Arlington Lamar’s Bobby Brown leaning toward Alabama or Oklahoma, Hines could be an option to fill the second defensive tackle spot in the class.

Back-to-back: DeShon Elliott once again recognized by the Big 12 after another two-interception game