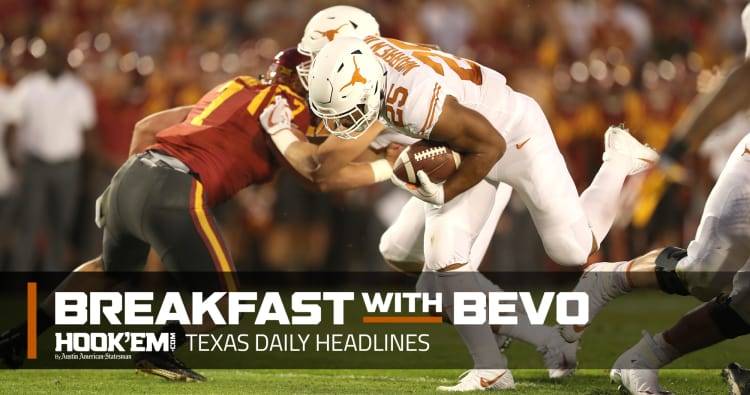 Getting the ground game in gear

The running game has sagged for the Longhorns this season, and the team is currently ranked sixth in the 10-team Big 12 in rushing yards per game. In Texas’ 17-7 win over Iowa State on Thursday, the Longhorns gained 141 yards on the ground, but only 2.7 yards per carry. But perhaps, the way the offense closed the game out — keeping the ball for more than seven minutes on a 13-play drive that bled the fourth quarter clock — can set the tone for upcoming games. Whatever the solution is, coach Tom Herman is taking a clinical approach to the team’s running game.

Shane Buechele in a boot, but should practice

On Saturday, school officials announced that starting quarterback Shane Buechele  sustained a sprained ankle in the Longhorns win over Iowa State, and the sophomore from Arlington Lamar was wearing a walking boot. Buechele played the entire game against the Cyclones and then met reporters while standing up for 10 minutes. It’s a general rule for training staffs to put a protective boot on anyone with any ankle pain.

Out of 142 snaps taken in the Thursday night game between Iowa State and Texas, the American-Statesman’s Danny Davis takes a look at the five plays that ended up making a big difference. Remarkably some of those plays involved the Texas’ running game, but a huge fourth-down stop in the game highlights a stat that shows that Texas’ leads the nation in one key defensive category.

The Longhorns remain in the mix with one of their top 2019 targets as Marquez Beason named a top six on Saturday consisting of Texas, Oklahoma, Arkansas, Nebraska, Washington, and Illinois. Beason, who is featured in Hookem.com’s Mike Craven’s 2019 Next 25, has made multiple trips to Austin since picking up his Texas offer in April, and the Longhorns are considered the team to beat for his commitment.

Texas hoops edge out Kentucky, others for Cincinnati forward

The Longhorns added another talented big man to their 2018 recruiting class on Friday when 6-11 power forward Jaxson Hayes announced he was picking Texas. Hayes unveiled his decision during a high school ceremony and posted a message on Twitter. He becomes the third player in Texas’ 2018 class along with 6-6 forward Gerald Liddell and 6-7 forward Brock Cunningham. By rule, Texas is not allowed to comment on recruits. The first day basketball athletes can sign a national letter of intent is Nov. 8.

Elite safety commits are noticing the play of DeShon Elliott