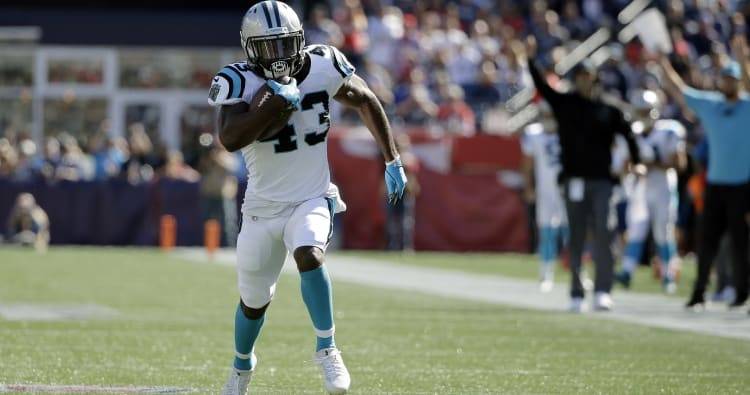 Jordan Hicks bounced back from an ankle injury in Week 3 to lead the Eagles in tackles as Philadelphia defeated the Chargers 26-24 Sunday. Hicks made nine tackles in the win as the Eagles held Los Angeles to just 58 yards rushing.

D’Onta Foreman continues to see a slight increase in his role. Though he didn’t make a reception in the 57-14 trouncing of the Titans, he rushed 13 times for 45 yards. That’s five more carries than he had in Week 3. Lamar Miller, Houston’s starter, had six more carries than the rookie.

Kenny Vaccaro and the Saints defense put on a stellar performance, earning their second straight win in a shutout over the Dolphins in London. Vaccaro had four tackles in the win as the Dolphins managed just 128 yards passing.

Earl Thomas, S, Seahawks—Thomas led the Seahawks with seven tackles and had a pass deflection. He helped the defense hold the Colts to just 18 points in the 46-18 victory.

Fozzy Whittaker, RB, Panthers—Whittaker and the Panthers bounced back from a bad Week 3 as they upset the Patriots 33-30 on the road. Whittaker had three catches for 34 yards and a touchdown.

Jamaal Charles, RB, Broncos—Charles had one catch for 14 yards and rushed just five times for 33 yards. C.J. Anderson had 20 carries for 95 yards, taking control of the lead back role.

Phil Dawson, K, Cardinals—Dawson was 4-for-4 on field goals, including a 50-yarder.

Keenan Robinson, LB, Giants—He had three tackles as the Giants remained winless after falling to the Buccaneers 25-23.

Malcom Brown, DT, Patriots—Brown had four tackles, but he’s on a struggling defense that fell to the Panthers 33-30.

Brian Orakpo, LB, Titans—Orakpo notched five tackles, but it was a terrible defensive day for the Titans as they fell 57-14 to the Texans.

Alex Okafor, DE, Saints—The Saints had their best defensive performance of the season and Okafor made three tackles in the process.

Derrick Johnson, LB, Chiefs—Johnson and the Chiefs moved to 4-0 with a 29-20 win over Washington on Monday night. Johnson had three tackles in the win.

Malcolm Brown, RB, Rams—Brown returned to action against the Cowboys and contributed one catch for 14 yards. He had no gain on his only rush.

Quandre Diggs, CB, Lions—Diggs and the Lions defense allowed just 284 yards of offense to the Vikings in a 14-7 win on Sunday. Diggs contributed two tackles in the effort.

Brian Robison, DE, Vikings—Robison made two tackles, but the Vikings came up short against the Lions.

Justin Tucker, K, Ravens—Tucker uncharacteristically went 1-for-2 on field goals in the 26-9 loss to the Steelers. He has a decent excuse, though, as his miss came on a 62-yarder at the end of the first half.

Hassan Ridgeway, DT, Colts—The defensive tackle made two tackles in the blowout loss to the Seahawks.

Adrian Phillips, CB, Chargers—Phillips had one tackle and hit the quarterback once as the Chargers fell to 0-4 against the Eagles.

Sam Acho, LB, Bears—Acho didn’t log a stat in the 35-17 loss to the Packers on Thursday.

Roy Miller, DT, Chiefs—Miller didn’t log a stat, but the Chiefs pulled out the win.

Colt McCoy, QB, Redskins—McCoy didn’t get into the game as the Redskins fell to the Chiefs.

Marcus Johnson, WR, Eagles—He didn’t record a stat as the Eagles moved to 3-1 with a win over the Chargers.

The post Longhorns in the NFL: Week 4 defenders shine and a running back scores appeared first on Hook ‘Em.

Texas beat writers Sound Off, is Connor Williams coming back?