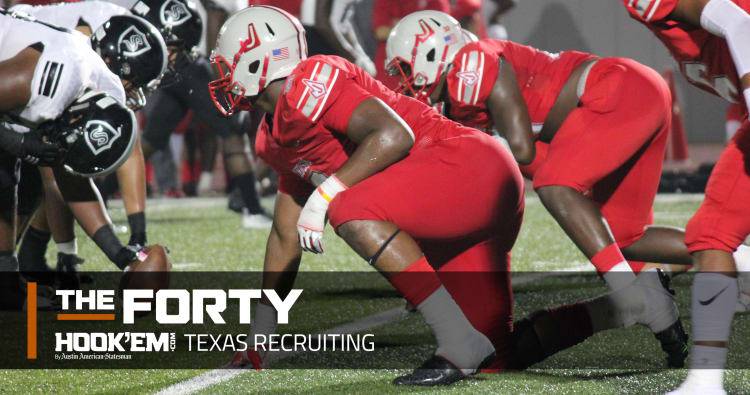 Cibolo Steele reached the Class 6A Division I championship game in Caden Sterns’ junior season. The Texas commit and 4-star safety was a key member of that team, patrolling the secondary as an all-everything defensive back and also contributing on offense as a wide receiver.

Steele lost two games in Sterns’ junior year. The Knights lost just one game the previous year, falling to Katy in the state semifinals. But the same success is eluding Steele through the first half of 2017; Steele (1-4) has lost four straight following last Friday’s loss to Converse Judson.

It was the first time Judson has ever beaten Steele in varsity football.

“All we need to do is keep practicing and work on the mental side of the game,” Sterns said. “We’re making mistakes we normally don’t make on defense, including me. I missed some tackles today I need to make. Losing isn’t fun, but we still have a long way to go.”

None of it will matter if Steele can reach the playoffs and make another deep run. Sterns understands the dynamics, and with recruiting in the rearview mirror, his complete focus is narrowed to helping his program regain its place among the state’s elite.

Sterns, who described himself as “100 percent committed,” plans to sign with Texas in December. “A few programs still reach out like TCU and Alabama, but I’m at home at Texas,” he said.

Finding a home in the Texas secondary is Sterns’ goal once he reaches campus. He hopes his versatility leads to early playing time. He’s considered one of the top safety prospects in the nation but indicated he’ll begin his college career as a cornerback. He also can play nickel and either safety spots in defensive coordinator Todd Orlando’s scheme.

“It is exciting watching the secondary improve with each game. The USC game was a great performance by the secondary. The whole defense, really,” said Sterns. “I try to watch and learn because football is more mental than physical. I want to be prepared when I arrive on campus.”

It took four tries for Julon Williams, but he finally did it Friday night. The starting quarterback at Judson and 3-star commit to Houston earned the starting job as a freshman and lost to Steele in his first three seasons. Friday night, his Rockets beat Steele 35-28 and Williams, a Fabulous 55 member, was the main reason why.

“This is up there with the best wins of my life,” Williams said. “I found a good rhythm and was able to use my athleticism. I thought I showed my ability to throw tonight against a good secondary. We made history tonight.”

Williams accounted for four touchdowns, including 206 yards and a touchdown pass. His future likely isn’t at quarterback. He’s listed as an athlete on most recruiting services and is aware a move to slot receiver is likely to come at the next level. Despite interest from other schools, including recent contact with Longhorns assistant coach Jason Washington, he remains committed to the Cougars.

“Houston believed in me from early on and that means a lot to me,” said Williams. “I’ve heard from other schools, including Texas. I’m going to listen to the offers and see what is best for me, but I’m committed to Houston and that’s where I see myself playing football.”

Texas is finding it hard to find defensive line options in the 2018 class. The lone commitment along the defensive line is from Keondre Coburn, a 4-star defensive tackle from Spring Westfield. The Longhorns don’t need to go far to find an option in 2019 because Judson’s DeMarvin Leal is set to be a top-20 player in Texas.

“It’s been crazy. I went from a relatively unknown prospect as a sophomore to people telling me I’m one of the top players in the state. It’s an honor and a lot of pressure,” Leal said. “It’s too early to name top schools or anything like that, but some programs are sticking out.”

Texas hopes it’s one of those programs. Leal is the only 2019 defensive tackle so far that holds an offer from the Longhorns. He’s a member of the Next 25 and a 4-star prospect who ranks as the No. 10 defensive tackle in the country, per 247Sports’ composite.

Leal is 6-4 and 255 pounds. His ability to play defensive tackle and defensive end makes him a unique prospect at the collegiate level, especially for an odd-man front like Texas’. His future might be as an end in a 3-4 defense.

“I like playing both positions, so it doesn’t matter to me,” Leal said. “The school I pick will know how to use me best and I’ll do what is needed to get on the field.”

It’s likely Texas is among Leal’s favorite schools since he referred to the new culture surrounding the Texas program as “perfect” and pointed to the proximity to home as factors that could help the Longhorns eventually gain his commitment. Leal holds 10 offers, including ones from Alabama and Texas A&M.

Injections and weird science: the answers to what ails the Texas offense