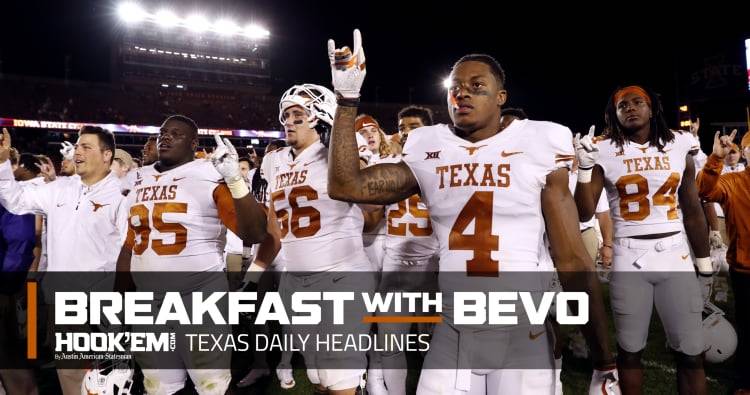 Sound Off: Talking Defensive Player of the Week, Texas offense

Texas beat writers Brian Davis and Danny Davis bring you more Texas Longhorns topics after the 17-7 win against Iowa State last Thursday. They talk DeShon Elliott, the Big 12’s Defensive Player of the Week, as well as where the Texas offense goes from here. The Longhorns still struggle to run the ball and managed just 17 points in Ames. Will Toneil Carter get more touches? Is Shane Buechele the best quarterback to run this offense? The Davis duo talks it out.

Columnists Kirk Bohls and Cedric Golden preview the matchup Saturday between the Longhorns and the Wildcats. After the Longhorns rode their defense to defense last weekend, Bohls and Golden think Carter will indeed have a bigger impact, and they expect another low-scoring affair against Kansas State.

Charles Omenihu is rounding into form

Charles Omenihu has the size and shape to be a defensive force but didn’t show it in his first two seasons at Texas. He’s blossoming as a pass rusher at the right time, however, and Texas coaches are now looking to get him on the field as much as possible in passing situations. The defensive lineman has 2 sacks so far this season after notching 3.5 all of last season.

Cedric Golden: Connor Williams will return for his senior year

Golden thinks Connor Williams will return to play for Texas next season. Williams’ decision not to have surgery on his injured knee is a sign he hopes to come back to play near the end of the season. Golden thinks that’s also a sign he’ll play at Texas next season, as well. The Longhorns definitely need him back.

Recruiting writer Mike Craven was in Converse on Friday night watching Caden Sterns and Cibolo Steele fall to Judson. Sterns, a 4-star safety committed to play for Texas, is staying positive despite his team’s 1-4 record. Sterns is “100-percent committed” to the Longhorns. Judson quarterback Julon Williams stole the show on Friday night and Texas has made contact with the athletic 3-star prospect. He remains committed to Houston, but is listening to offers. His teammate, defensive tackle DeMarvin Leal, looks to be a Texas target at defensive line for the 2019 class.

Longhorns in the NFL: Week 4

A former Longhorn scored and multiple defenders had good games to help their teams to victory in this edition of the Longhorns in the NFL.

Longhorns in the NFL: Week 4 defenders shine and a running back scores