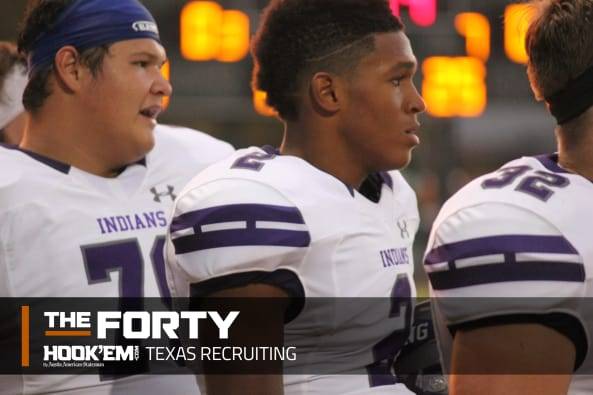 Texas’ lone commitment for the 2019 class doesn’t shy away from those expectations as the leader of Port Neches-Grove High School, and he’s ready to shoulder those same responsibilities when he arrives in Austin.

“I want to be the leader of the class and help round up the best talent,” Johnson said Monday night after his team beat Livingston 59-14. “The more I visit Texas in person, the easier it’ll be to make a connection with the guys in my class. Communicating face-to-face always makes more of an impact than texting or a direct message.”

“I just keep doing what I’ve been doing,” Johnson said on remaining focused on football instead of the hype. “I keep a strong head and stay focused on doing the right things. The things that got me the publicity and the offers.”

The process of choosing Texas

It was no secret Johnson favored Texas early in the recruiting process. He unofficially visited Texas numerous times in the offseason and watched a practice in the spring. He made a return trip July 21 for the Stars at Night camp.

“Texas was on my radar as soon as coach Herman got the job over there. I went to the camp and was set to commit that day,” he remembered. “I won the quarterback and tight ends race and Sam (Ehlinger) handed me the microphone and I committed over the big Jumbotron.”

Johnson and Tom Herman have a connection. It began when Herman coached at Houston and Johnson watched the Cougars win games with a mobile quarterback. Johnson wanted to be a part of the offense run by Herman, and that interest grew as they grew closer.

“Most coaches you meet are serious dudes and aren’t real fun to be around. Coach Herman makes you smile every time you’re around him,” he said.

“I talk to coach Beck a lot,” said Johnson. “He’s not a rah-rah guy but he can hone in on what you need to work on and he helps you out as a coach and a person. He doesn’t just ask about football. He cares about my family and me as a person.”

Texas fans are yet to see Herman and Beck unleash an offense with a dual-threat quarterback. Shane Buechele is a pocket-passer who was recruited to run the air-raid under Charlie Strong. Sam Ehlinger can run, but he’s more of a power-runner than a true dual-threat rusher. Johnson is blazing fast and sees himself running the offense like Greg Ward Jr. did while Herman led the Cougars.

“I see myself fitting into the style well,” Johnson said. “Texas does a lot of the same stuff I’m already doing in high school as far as concepts, reads and plays in the playbook. It’s pretty similar.”

Remaining focused despite a turbulent start

Football became irrelevant for some parts of the state when Hurricane Harvey hit. Port Neches-Grove was one of those high schools that lost football games due to the storm. The Indians now play most games on Mondays, including the most recent outing against Livingston.

For the culture #HookEm pic.twitter.com/LNq2s1grDI

“We come practice every day with a sense of urgency since because we lost out on some games,” he said. “The weird schedule is the same for everyone we’re playing so it is about focusing in practice and being prepared in games.”

Though his team has only played three games, Johnson is already noticing improvement from his sophomore season.

“My overall poise and knowledge of the game is getting better with each game,” he said. “As a sophomore, I rushed things a bit. I improved as the season went on, but I notice the game slowing down more as a junior.”