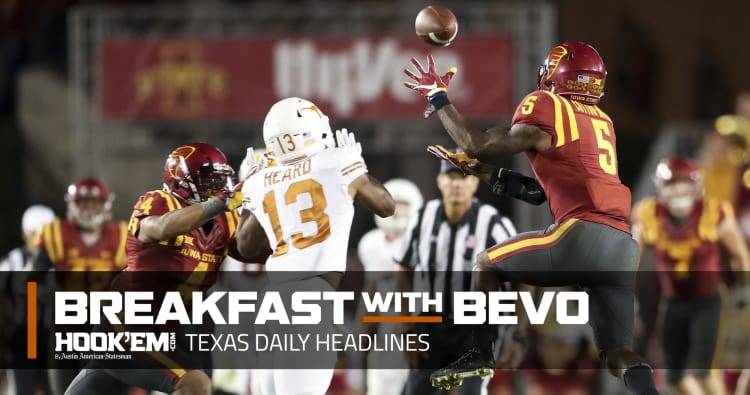 The Longhorns have an injury-prone sophomore quarterback, a freshman backup, two injured starting tackles and a struggling running game. These are the issues Tim Beck has to deal with in order to keep the Longhorns scoring enough points to win. He sees the offense as evolving and improving. Head coach Tom Herman and Beck agree that getting Toneil Carter more involved could help provide a spark.

After giving up 51 points to Maryland in the season opener, the Texas defense has looked like a different set of players. The Longhorns have given up just 34 points in the last three games, including a shutout. But now that the defense is clicking, the offense needs to step up, according to columnist Cedric Golden. After this week’s contest with Kansas State, the defense can’t be expected to hold Oklahoma and Oklahoma State to fewer than 24 points, can they?

Elliott made six tackles and picked off two passes for the second straight week to earn the Jim Thorpe Award Player of the Week honor. Elliott has four interceptions and 18 tackles on the year and is the first Texas player to earn the Big 12 defensive player of the week award in back-to-back weeks.

Recruiting writer Mike Craven talks with Roschon Johnson, the lone member of the class of ’19 committed to play for Texas. Johnson is eager to help the Longhorns round up a great class of players. The 4-star recruit is a dual-threat quarterback that likes to use his legs to get the job done. Johnson talks about his process in choosing Texas and how he battled through the turbulent start of the season.

The Kansas State quarterback will have all defensive Longhorns eyes on him Saturday. The 6 foot, 3-inch, 212-pound Ertz leads the Wildcats in passing and rushing. He scored twice on the ground against the Longhorns last season. In an effort to prepare for the dual-threat quarterback, reserve running back Tristian Houston is mimicking Ertz on the scout offense.

Why not even a little Sam Ehlinger?

Texas beat writer Brian Davis dives into this week’s mailbag where readers asked why the Texas freshman isn’t a part of the game plan even a little bit after a good performance against USC. One reader even compared Ehlinger to Colt McCoy and Shane Buechele to Case McCoy. Another reader expressed appreciation for Jerrod Heard in general. The quarterback turned wide receiver didn’t run any wildcat plays likely due to a large gash received in practice before last Saturday’s game.

Four different websites have Texas going to five different sites during bowl season. One, in fact, has Texas staying home. Check out where the Longhorns may end up by season’s end.

The Week 6 guide to watching Texas commits in action