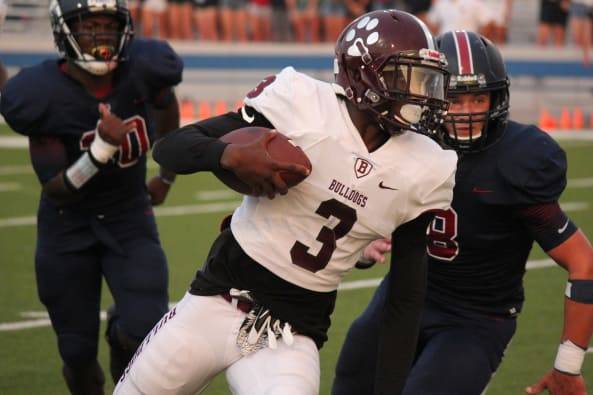 District begins for most commitments

Each of Texas’ in-state commitments is either playing a district game or on an open week. Safety commit Caden Sterns of Cibolo Steele and kicker Cameron Dicker of Lake Travis are the only two in-state commitments without a game to play. The rest of the 2018 group faces important matchups as teams across Texas start to jockey for playoff positions. Byron Hobbs, a 3-star linebacker from Fort Worth Eastern Hills, is still out with an injury.

Newbury Park and 4-star quarterback commit Cameron Rising are 4-2 heading into an away game against Oaks Christian. Rising is again putting up video game numbers at quarterback. Through six games, the 4-star has 1,187 yards passing and 335 yards rushing, accounting for 13 touchdowns.

The last time out, Moore registered 18 catches for 242 yards and three touchdowns in one game. His team hosts its fifth game of the year on Friday after a bye week.

Thompson transferred schools over the summer, following his former offensive coordinator, Jeff Brickman, from Southmoore High School to Newcastle and the group earned its first win last week. Through five games, Thompson has 1,389 yards passing and 471 yards rushing. He’s accounted for 13 touchdowns and has thrown 5 interceptions.

Adeoye continues to see limited action in his senior season at IMG Academy. The 4-star linebacker posted six tackles in his first three games of the year.

Arizona Western College was on a bye last week. The group travels to Snow College on Saturday.

The post The Week 6 guide to watching Texas commits in action appeared first on Hook ‘Em.

With Connor Williams and Andrew Beck out, Texas turns to quarterbacks for offensive leadership