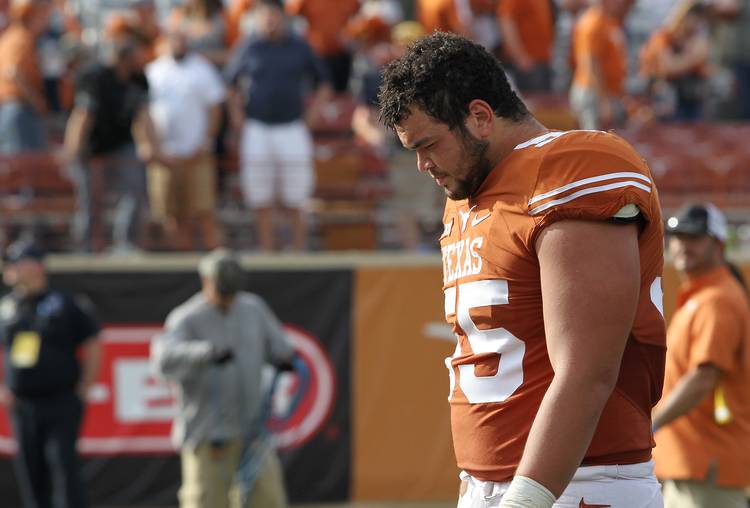 When Texas hosts Kansas State on Saturday, an offense averaging 34.5 points per game will attempt to answer some questions.

First off, who is going to run the ball? Will Collin Johnson find more targets after last week’s two-catch game against Iowa State? Can the offensive line get the job done with freshman Derek Kerstetter and senior Tristan Nickelson at the tackle positions? This also wouldn’t be a story about the Texas offense if someone didn’t ask something about the quarterbacks.

There is one additional question that won’t be answered by statistics. Who is providing an on-field voice for the Longhorns?

Before the season started, junior lineman Connor Williams was the only offensive representative among the four captains named by UT coach Tom Herman. Williams, though, suffered a knee injury on Sept. 16 and did not make last week’s trip to Iowa State. Williams was replaced at the pregame coin toss by senior tight end Andrew Beck, who won’t play this season because of a fractured foot.

With Williams and Beck sidelined, Texas offensive coordinator Tim Beck said the Longhorns will lean on veteran offensive linemen like Patrick Vahe, Jake McMillon and Nickelson for leadership. Seniors Armanti Foreman and Dorian Leonard were also mentioned by Beck, although those receivers aren’t always on the field since they are part of a rotation. The quarterbacks will also have to step up.

“Shane has to continue to do that, or if Sam’s playing, then Sam has to do it,” said Beck, referring to sophomore Shane Buechele and freshman Sam Ehlinger. “Whoever that QB is, that’s part of the leadership role he possesses, he’s got to be able to do that.”

Texas is hopeful that Williams will return this season. Until then, he has seeming found a different way to guide the Longhorns. Johnson said last month that Williams “still has a responsibility to lead.” Johnson added the 6-6, 315-pound All-American was being encouraging while attending the team’s workouts, practices and film sessions.

“Talking with Connor, nothing’s changed,” Vahe said. “The same expectation that he had for the rest of the team, he still wants that same expectation now. The only thing is that I’m trying to make sure that I help him out as well, keep his head up.”

The post With Connor Williams and Andrew Beck out, Texas turns to quarterbacks for offensive leadership appeared first on Hook ‘Em.

The Week 6 guide to watching Texas commits in action